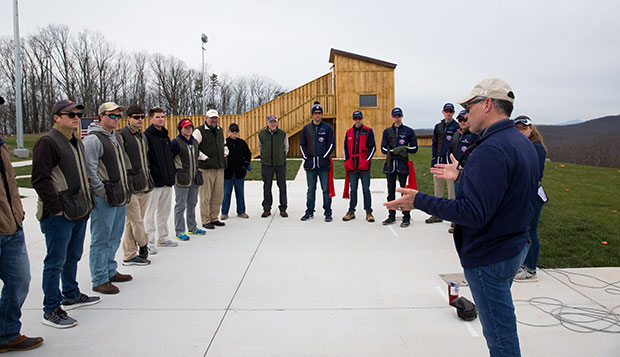 Liberty University shooting teams Head Coach Dave Hartman has called a mandatory informational meeting for anyone interested in competing on the second-year teams, set for Monday, Sept. 3, from 7-8:30 p.m. at large conference room in the LaHaye Ice Center.

"I'm expecting a very large turnout as this meeting is a prerequisite to becoming a part of the shooting sports teams," Hartman said, noting that tryouts are tentatively set for the second week of September.

Two new disciplines of shooting sports have been added this season following the spring completion of a rifle range and a 3-Gun/pistol range at the Liberty Mountain Gun Club (LMGC).

"Students will be trying out for three teams this year instead of just one — the shotgun team, the three-gun team, and the rifle team, which will shoot both precision small bore and high power rifles," Hartman said. The three-gun team will also enter action pistol events and the shotgun team will compete in American trap, American skeet, sporting clays, International trap, International skeet, and super sporting clays.

Phase One of construction on the LMGC, located on a 600-plus-acre tract of land near the Hydaway Outdoor Recreation Center, was completed in June with two new sporting clay ranges along the adjacent Lone Jack Mountain, available for use by reservation only. Liberty Planning and Construction will soon start the project's second phase, which includes a lodge behind the shotgun range with viewing areas and team storage space.

Hartman said prospective team members should not bring their sporting arms to Monday's meeting, only their Liberty IDs and insurance cards to fill out paperwork. He is working with Liberty University Police Department chief range safety officers Josh Bryant, Ben Sadler, and Andrew Medford to coordinate classroom safety training courses for prospective team members to be held Sept. 29 and Oct. 8 in the School of Law.

In the meantime, Liberty students, faculty, and staff who have yet to take the safety class can train on the LMGC's shotgun, rifle, or pistol ranges or trap or super sporting clay stands after viewing a four-minute video at the facility and signing an assumption of risk form.

The shotgun range is open Monday through Friday from 2-8 p.m., Saturday from 10 a.m.-6 p.m., and Sunday from 2-5 p.m., with the new rifle and pistol ranges open those same hours Friday through Sunday only, starting Sept. 7.

Information on LMGC's general rules and regulations as well as student pricing for ammunition, targets, and sporting arms rentals are available online. Email LUPDrange@liberty.edu lupdrange@liberty.eduabout registering for the next safety course, or visit the LUGunClub Twitter account.