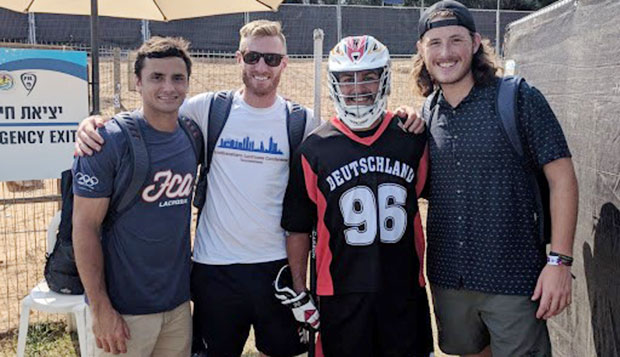 "It was a lot of lacrosse in a short period of time and there were a lot of elements of the trip that made it really special," Zumpano said. "The biggest thing was getting to experience it with guys I coach and played with and to connect in a deeper way with FCA."

The 28-member Team Serve formed a practice squad which helped prepare world championship teams from Spain, Mexico, Norway, Turkey, Scotland, Uganda, the Netherlands, the Philippines, Luxembourg, South Korea, and Russia for tournament play. The squad also competed against seven other countries' developmental teams in a lacrosse festival and ran camps and clinics at a boarding school for young kids in downtown Jerusalem.

"The opportunity to get out and play and experience lacrosse in a global environment was really impactful for me," Zumpano said. "On top of that, getting to do that in the Holy Land and to experience a rich historical perspective on our faith and then to share it with over two dozen teams was the coolest thing."

Team Serve was made up mostly of players from the United States, but also included the president of Ukraine Lacrosse, which recently helped found the 62nd nation of the Federation of International Lacrosse (FIL).

Puerto Rico, founded by former Flames Nathan Lowmaster and Miguel Lozada as the 56th FIL member nation in 2016, placed eighth in its first world championships appearance, losing to Israel in the seventh-place game.

Rising senior Lukas Tophoven, meanwhile, played an active role in leading Team Germany to a top-10 finish in the 46-team tournament. The defender, who also competed for the national team at the world championships in Colorado 2014, helped Germany secure an automatic bid to the 2022 FIL World Championships in British Columbia, Canada, with a second straight ninth-place showing. Team Germany finished 6-1 with its only setback a 14-9 loss to Puerto Rico.

"I played about the same amount (as 2014), but I was like a veteran so it was more easygoing and relaxed," said Tophoven, a psychology major who will take his senior season at Liberty off to serve as a resident assistant. "We didn't really put big burdens on our backs and had a lot of fun. I definitely had my own role and I think I played it well."

Tophoven, who has dual citizenship since his father was born in Germany, enjoyed the off-field experience even more. Born in Newport News, Va., his family spent eight years serving as missionaries in Berlin before returning to Virginia Beach in 2016.

"I've been to Europe several times, but this was my first time being in Israel," he said. "We spent the entire last day exploring Jerusalem and visited one of the biggest Jewish memorial sites in Israel. I thought we represented our country very well, considering Germany's past with Israel and its history of the Holocaust."

He said he and his teammates, who stayed near the Gaza Strip, were surprisingly warmly received.

"There was no hostility, more of an open-arms welcome, with a lot of excited faces when they heard we were from Germany," Tophoven said. "As Germans, we accept that the Holocaust is part of the past and look forward to a better future."

He took advantage of opportunities to share his faith with his teammates after being equipped by teammates and classmates at Liberty.

"As a guy who believes in Christianity, I was able to be a witness to teammates who are not Christians," Tophoven said. "They asked me questions (about the historical significance of the Holy Land) and I could explain it. After being at Liberty for a while, I was able to talk a bit more about what I believed and be a little more vocal, coming off as a friend and a teammate and not only a witness." 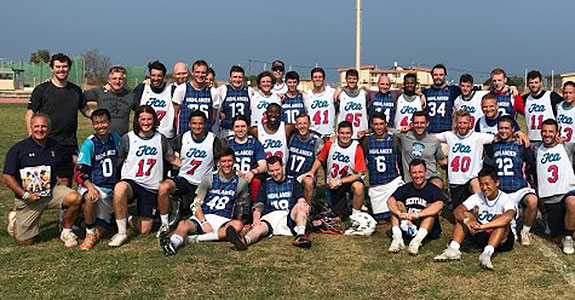 FCA Lacrosse's Team Serve members pose for a group photo with Scotland's national team after competing in the festival that followed the FIL World Championships.