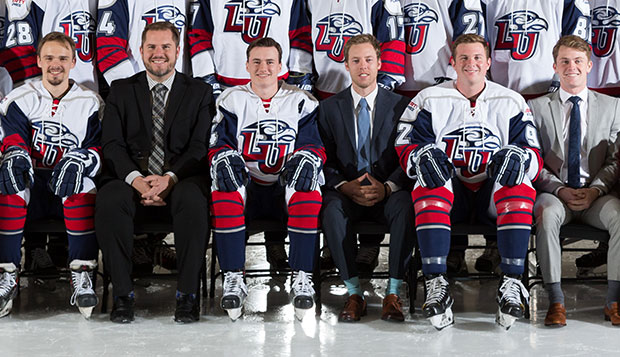 Jared Smith, Liberty University's new ACHA Division III men's hockey head coach, played forward for former coach Rett McGibbon in the program's first two seasons from 2009-11 and served as an assistant coach alongside him for the past four years.

"It won't be a dramatic change for our guys so it should be a really good transition," Smith said. "Rett and my style of coaching hockey are basically the same and we develop players the exact same way, to be hard-working team players, which will continue."

Smith, who graduated with a degree in business marketing in 2011 and earned his M.B.A. from Liberty in 2016, grew up playing hockey in Toronto, Canada. Though he played right wing, he realizes games are won and lost on the defensive end.

"I'm probably more of a defensive-minded coach and try to get players to take care of their own end first," said Smith. "On the offensive side, guys love playing with the puck and they have good instincts on how to score it. A lot more thinking happens on the defensive side of the game, which is where most of coaching is done, too."

Caleb Fitzpatrick, who assists McGibbon as an analyst for the Flames' LFSN DI hockey game broadcasts, will stay on Smith's staff as an assistant, serving as the team's video coach. Former ACHA DI goalie Matt Pinel will join the staff as goalie coach. Smith is thankful to have McGibbon around if he needs to call on him for wisdom.

Though the Flames graduated their top two scorers, Kade McDaniel and Jonathan Klakring, Smith still has a strong corps of returning players to work with, including senior defenseman and head captain Dillon Brown and left wing and assistant captain Kyle Jassman. He will have a lot more ownership of the team, starting with making final roster cuts after tryouts in late August.

"The program keeps developing," Smith said. "My first year, we had to cut like one kid from tryouts. When we got the new rink (the LaHaye Ice Center after it was renovated in 2015), it attracted so many recruits, and the DIII program started getting noticed, so competition got so much better in practice."

He expects the returning players to be in good condition after Club Sports strength & conditioning Graduate Assistant Caleb Overholser set them up with summer workouts at the end of last season.

The Flames are looking forward to becoming members of the East Coast Collegiate Hockey Association (ECCHA) this fall.

"Though they haven't been together all summer, the guys are getting excited to get some rivalries going and a few extra playoff games," Smith said. "We want to keep progressing all the way through to regionals and to qualify for nationals."