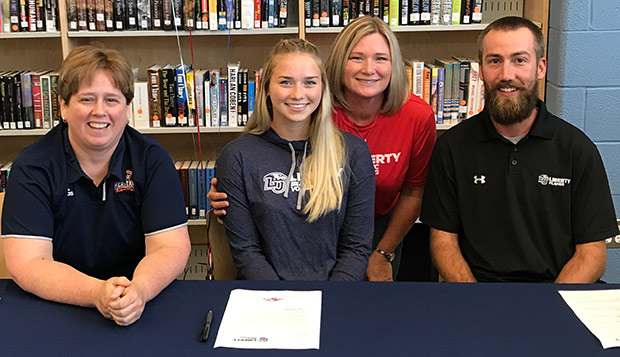 Marabeth Hammersmith (center, with her mom) signs her letter of intent to attend Liberty this fall at a ceremony at Heritage High School, attended by her coach Kelly Bryant as well as Flames Head Coach Kaleb VanDePerre.

"She is the second commitment in program history to sign her intent before coming to Liberty and we are excited to get her on campus and into the sand with the team," said VanDePerre, who witnessed Liberty Christian Academy graduate Hannah Heller sign her commitment last June. "We are excited about her work ethic and how she will mesh with our current players and for the 2019 campaign, when she may be joined by a few other recruits from out of state."

VanDePerre added former Lady Flames indoor volleyball player Jessica Nelson to his staff to serve as his assistant coach this spring, working primarily with the women's team. He expects Hammersmith to make an immediate impact in her freshman season.

"Marabeth is a four-year varsity (indoor volleyball) player and leaves a huge legacy behind at Heritage," he said. She ranks first in program history in points, aces (145), and kills (691), and third in digs (688). "We expect her to compete for a top position on the team and battle for (the women's bid to NCSVA) nationals."

Hammersmith's versatility as an all-around player should serve her well as she transitions from the indoor to the outdoor game.

"She has incredible range on offense, is a great passer and defender, and is probably one of the top five most athletic players we have had on the beach roster," said VanDePerre, who teamed up with Hammersmith to reach the semifinals of Liberty's co-ed tournament earlier this month. "She has some previous sand experience at a recreational level and as she continues to learn the intricate details and gets her sand legs under her she will really take off."