DI completes sweep of Arizona with another third-period rally 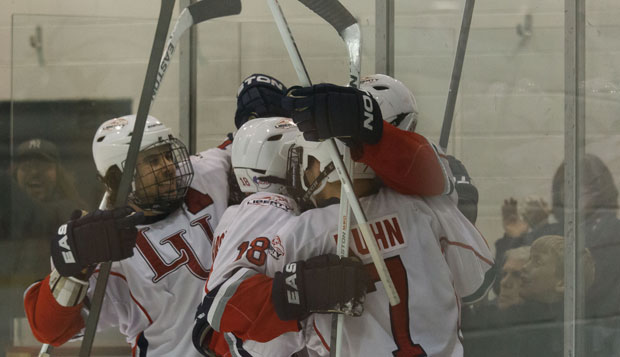 Liberty (16-10-1) outshot the Wildcats (11-13) by a 49-43 count and had only 27 penalty minutes compared to 43 for Arizona. The Flames scored four power-play goals, two by Baumgarten, in one of their best man-up performances of the season.

"That would rank up there," Liberty head coach Kirk Handy said. "It was a real physical game. The power play was definitely clicking tonight and a big part of that was Brent Boschman. Brent has a knack for getting in and finding the open areas. He's a very, very skilled offensive player and when he's in a zone like he was tonight, he's very dangerous."

Boschman had a hand in four of the Flames' goals with one score and three assists.

"Last year, he was our leading scorer and he's someone who, night-in and night-out is a big part of our offense," Handy said.

Liberty opened a 3-1 lead after the first period, scoring the last three goals as they did again in the third.

Baumgarten, who scored twice in the first, completed his hat trick with his third goal early in the third, lifting Liberty to a 4-3 advantage.

That lead was short-lived, however, as Arizona tied it back up at the 15:25 mark on a goal by Justin Gaudino and went up 5-4 less than two minutes after that when Brian Slugocki capped off a hat trick of his own.

But Boschman re-tied it by finishing off Liberty's fourth power-play goal with 8:49 to go, assisted by Scott Morongell and Lindsay LeBlanc, who got the game-winner a minute and a half later. After Arizona pulled its goalie, Bob Schultz, Morongell put the game out of reach with an empty-net goal in the final minute.

"(Boschman) has an excellent shot and he was able to find the back of the net and it was huge on the power play," Handy said.

Though pleased to come away with two wins on Liberty's three-game road trip to Arizona, especially on the heels of a 4-3 shootout loss to top-ranked Arizona State, Handy wasn't completely satisfied with the Flames' defensive showing against the Wildcats.

"Anytime you can pick up a W is great, but there are some areas of improvement," he said. "We're not satisfied with where we're at. We want to take it to the next level.

"A big area we've got to work on is in our defensive zone coverage. It wasn't where it needs to be. We had a couple breakdowns that led to them scoring goals. We have to make sure that we tie up."

Handy was glad to renew the rivalry with Arizona coach Sean Hogan, who formerly played and coached at Oakland and will serve on the U.S. national university team staff next year.

"When he was at Oakland, we played him nine years in a row and we have a great mutual respect," Handy said. "When we get together, we've had some great games."

Liberty, ranked 10th in the ACHA, travels to West Virginia next Friday and Saturday nights before returning home to the LaHaye Ice Center next Sunday for a 4 p.m. showdown against rival Virginia Tech.