Flames' comeback bid against No. 1 Panthers snuffed in OT 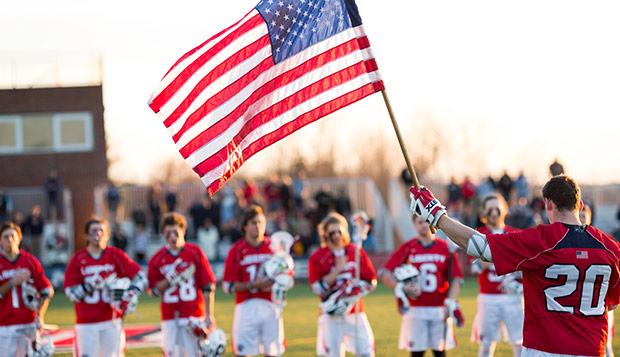 Junior midfielder Chase Wright waves the flag before a March 9 game at the Liberty Lacrosse Fields. (Photo by Nathan Spencer)

Liberty University's men's lacrosse team made believers out of those who doubted the Flames could compete out West in their first MCLA Division I National Championships this week in Salt Lake City.

After upsetting No. 8 Concordia (Calif.) in Monday night's opener, No. 9 Liberty nearly repeated the feat in Tuesday night's quarterfinal against top-ranked, 2016 national champion Chapman, staging an incredible comeback to take the Panthers to overtime before seeing their season end with an 11-10 defeat.

"It was a tough loss but we're really proud of the guys for the way they finished the game and how they played down the stretch," Flames Head Coach Kyle McQuillan said. "We're a young team, we'll be back, and our message to the guys is if they don't think they can win a national championship, this shows they can. This season, we took a pretty significant step forward and we're only going to get better, so we're going to take this opportunity and use it as momentum going into next year."

Liberty (9-6) struggled in gaining and maintaining possession for much of the first half, allowing Chapman (14-0) to net the only goal of the first quarter before building a 6-0 advantage late in the second.

"We came out rusty, threw the ball away and couldn't clear," McQuillan said. "Our nerves were getting to us going against the No. 1 team in the country. So many teams would have quit, but the guys played hard and finished strong, showing character, especially after getting down 6-0."

Flames sophomore attack Caleb Britton ended the scoring drought with consecutive goals in the closing 1:10, first finishing an off-balanced putback of a shot from the top of the box by midfielder Brett Miller, the Flames' lone senior. After a save by Liberty goalie Brayden Harriman, Britton struck again with a turnaround shot off an entry pass from junior midfielder Chase Wright six seconds before halftime.

Four minutes into the second half, Flames sophomore attack Derrick Esh came out from behind the left endline and fed cutting freshman attack Matteo Zumpano for a point-blank score in the left crease, trimming the deficit to 7-3. But moments later, Panthers' leading scorer Wiley Bonham roamed from right to left behind the Flames goal and assisted George McGuirk in the right side of the box for a low sidearmed shot and an 8-3 advantage.

Wright sneaked behind the Panthers defense along the left endline and pocketed a sharp-angled top-shelf shot to bring the Flames back within 8-4 before Bonham extended the Panthers' lead to 9-4.

However, Liberty ended the third quarter the same way it did the second, with back-to-back goals. Sophomore midfielder Carter Elliott took advantage of Chapman's switch to zone defense by uncorking a slingshot from the left side before junior attack Sam Gregory trimmed the gap to 9-6 with an arching drive through traffic from the left wing to the top of the box where he fired into the upper netting.

Harriman showed quick reflexes on a point-blank stick save of a shot from deep in the right crease, but the Flames turned the ball back over and the Panthers capitalized when Parker Core sent a pass from up top into Bonham, who put away a sweeping shot from out in front.

The Flames retaliated when Zumpano found Esh in the top of the box where he sliced smoothly through Chapman's defense and released a dart that cut the deficit to 10-7.

With 7:23 to go, Liberty drew within two goals when Britton received a pass in the left crease and made a driving feed to a leaping Zumpano, who caught the ball and released his shot past Chapman goalie Zach Rich in one motion.

Following a Liberty timeout with possession, Wright closed the gap to 10-9 by rifling a perimeter shot from the right side past Rich with 2:49 remaining in regulation.

After Rich made a clutch save of a shot by Wright, Liberty called timeout and brought in sophomore goalie Ryan Reynolds, applying pressure defense. Junior defender Ean White forced a turnover out of a double team with 21 seconds to play and the Flames executed their fast break to perfection, capped by a spectacular running bounce-shot finish by Esh inside the right post for the equalizer with six seconds to go, forcing overtime.

As BYU upset No. 2-seeded, undefeated Utah on an adjacent field, Chapman narrowly averted Liberty's upset bid. Midway through the four-minute sudden-death overtime period, Bonham received a pass across the box from David Howren and launched a missile from the right side past Harriman top shelf for the game-winner.

"Unfortunately, we lost a tough one, but our defense played great, we played team lacrosse. We have no regrets," McQuillan said, noting that the Flames represented the SELC, which sent a record four teams to the tournament, extremely well. "We're starting to make some traction and power our way in to that top echelon of the league with those perennial national contenders."