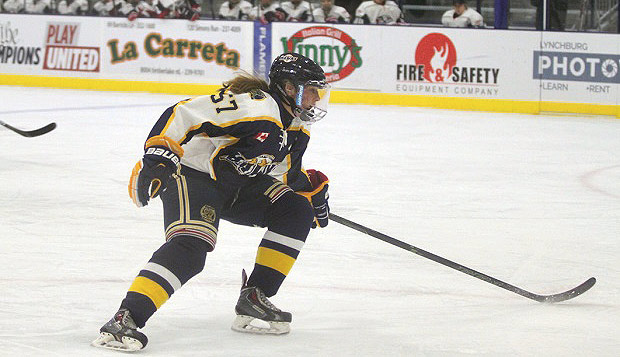 Alexis Paulmert played forward and served as a team captain for the Hamilton Hawks when they visited the LaHaye Ice Center in September 2017.

"Lexi is a talented forward who brings a great skill set," Lowes said. "She has great size and strength that make her dangerous around the net and will allow her to win battles. Lexi is a hard worker, has leadership potential, and should be a great fit to the culture here at Liberty."

He said Paulmert brings a playing style similar to many of the Lady Flames' power forwards who led Liberty (29-3) to its second ACHA DI National Championship in four seasons with a 2-1 triumph over second-seeded Adrian on March 18 in Columbus, Ohio.

"We were very excited when she became our first (offseason) commitment and we believe she has a very bright future at Liberty and in the ACHA," said Lowes, who recruited her when the Lady Flames hosted the Hawks in early September. "Alexis joins a growing list of players that have come to Liberty from the Hamilton Hawks. We are fortunate to have a relationship built with that organization that allowed us to meet and evaluate Lexi on and off the ice and expose her to our program."

Paulmert, from Waterford, Ontario, plans to major in criminal justice with an emphasis in crime scene investigation.

"I had the opportunity to spend a week on campus and I was amazed by the breathtaking scenery and endless opportunities Liberty has to offer," Paulmert said. "From the moment I stepped on campus I fell in love with Liberty's atmosphere. The fact that everyone was so friendly and inviting made my experience one that I would never forget."

She is eager to begin her college career and to help the Lady Flames defend their national title as a freshman working her way into the mix in a deep corps of forwards.

"I am looking forward to the competitiveness both on and off the ice," Paulmert said. "I can't wait to put on my Liberty jersey and assist our team in claiming another national championship."