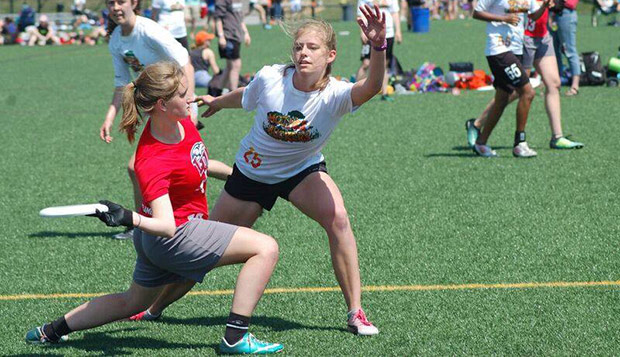 Senior handler Emily Ross makes a forehand pass in a game against William & Mary at the April 14-15 Virginia Sectionals at JMU. (Photo courtesy of Robin Stow)

Seeded 14th out of 16 qualifiers from sectional tournaments in Delaware, Maryland, North Carolina, South Carolina, and Virginia, Liberty held its seed after going 0-3 in Saturday's pool play and 1-1 in its two playoff games on Sunday.

"In terms of who we played and how well we played against them, we as a team really peaked at this tournament," Mast said. "We played aggressively, with confidence in ourselves and trusted in each other to make plays. I was pleased for such a young team to learn and bond as fast as they did."

Liberty led Duke, 2-1, early in its opening contest before the Blue Devils switched from man-to-man to zone defense and pulled away for a 13-3 victory. The Lady Flames then rallied from a 7-1 halftime deficit in its game against South Carolina before falling by a final score of 9-6 and gave up several long wind-aided touchdown passes an 11-5 setback to Towson.

That put Liberty in the lowest of three playoff brackets, where it split two extremely competitive contests. The Lady Flames broke William & Mary twice to seize an early lead before holding on for a 12-11 triumph. Liberty then led American University by a narrow margin for most of Sunday's second game before it was eliminated, 9-8.

Senior handler Jennifer Vachon had a phenomenal weekend, leading the team in assists, while junior McKenzie Ross was a solid offensive leader who played consistently all weekend. Senior Emily Ross, normally a cutter, switched to handler and still scored the most goals for the Lady Flames. Mast used sophomore Bethany Fowle in a new offensive role, isolating her at midfield where she made a few long scoring passes.

Mast said the Lady Flames ended the season eager to work toward loftier accomplishments next spring.

"We are only losing four seniors this year, so we're going to have a strong foundation going into next year," he said. "The camaraderie the girls have formed combined with the speed at which they are learning makes me excited about next season."