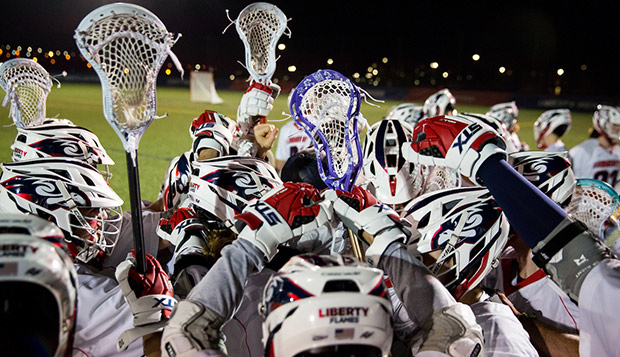 The Flames celebrate a March 10 upset of then-No. 10 Arizona State at the Liberty Lacrosse Fields. (Photo by Andrew Snyder)

On Sunday night, Liberty University's men's lacrosse team received its first at-large bid to the May 7-12 MCLA Division I National Championships. The ninth-seeded Flames (8-5) will face No. 8 Concordia next Monday at 7:15 p.m. (MST) at the Salt Lake City Regional Athletic Complex.

Concordia, a Christian university based in Irvine, Calif., is playing its first season at the MCLA DI level after winning the DII national title last spring. It competes in the Southwestern Lacrosse Conference (SLC), which also includes top-seeded Chapman (15-0), which dealt the Eagles (12-2) their only two losses this season. The second came in the SLC championship game Concordia defeated defending MCLA DI champion Grand Canyon (9-2, seeded 10th) in the SLC semifinals.

"They're a very strong team," Flames Head Coach Kyle McQuillan said of Concordia. "We like where we landed and feel we have really solid opportunity at a first-round victory."

Liberty is one of four SouthEastern Lacrosse Conference (SELC) teams in the national tournament, more than any other conference in the country. McQuillan believes the Flames' strength of schedule this season has prepared them well for their first MCLA DI National Championships appearance.

"We've seen and played a lot of the teams that will be at the tournament," McQuillan said, noting that Liberty gave No. 3-seeded Michigan State its only loss and defeated No. 12 Georgia Tech in the SELC Tournament opener. "We have been playing a high level of lacrosse all year and the national tournament shouldn't be any different."

A win against the Eagles would most likely send Liberty to a Tuesday quarterfinal contest against Chapman, from Orange, Calif., which faces No. 16 Indiana in Monday's first round. The entire tournament bracket is posted on the MCLA website with semifinal games set for Thursday and the championship final on Saturday.

"It's a definitely a great opportunity for the guys and we're hoping to build some experience," McQuillan said. "But our goal, obviously, isn't just to get there. We want to perform. Hopefully we will have a great week of practice this week and build some momentum heading into this weekend."

The Flames fly to Utah on Sunday, giving the team a full day to acclimate to Salt Lake City's 4,226-foot elevation.

"Knowing what we have ahead of us, I think the guys will come out more energized at practices this week," McQuillan said. "We're definitely going to have to play the best lacrosse we have all season if we want to have any success in Salt Lake City because all of the teams that have qualified are fantastic programs. I am confident these guys will be ready to give it their best shot."