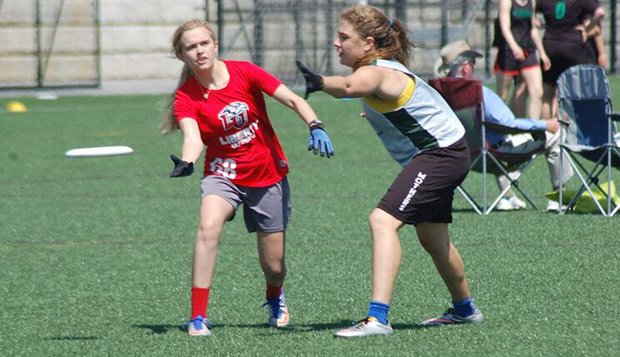 Liberty University's women's Ultimate team will compete in its fifth consecutive USA Ultimate East Coast Regional Tournament on Saturday and Sunday at Smith River Sports Complex in Axton, Va., where the Lady Flames will vie for one of two autobids to the May 25-28 USA Collegiate National Championships in Milwaukee.

"It's another opportunity to improve as a team," Liberty Head Coach Jonathan Mast said. The Lady Flames, ranked 143rd, will be one of the lower seeds in the 16-team regional field. "It will be very stiff competition. lt's the pinnacle of our season. … It would be awesome … to go all the way to finals and make it to nationals. It would be a Cinderella Story. We'll see what happens."

The Lady Flames were seeded fourth and placed third at the Virginia Sectionals played April 14-15 at JMU.

"We won all of the games we needed to win and lost to the two teams that were ranked first and second in our section and ended up breaking seed and taking third," Mast said. "I was very, very pleased, especially with such a young team that we have after losing 10 seniors last year and only having about five returners."

After placing fifth at the last two regional tournaments, the Lady Flames are shooting to reach the semifinals.

"Regionals will be a whole different ballgame compared to sectionals," Liberty sophomore Bethany Fowle said. "It's definitely going to be a challenge. I am so excited. We're going to have to step it up as a team and try to leave our mark so next year we can come back and play even harder."