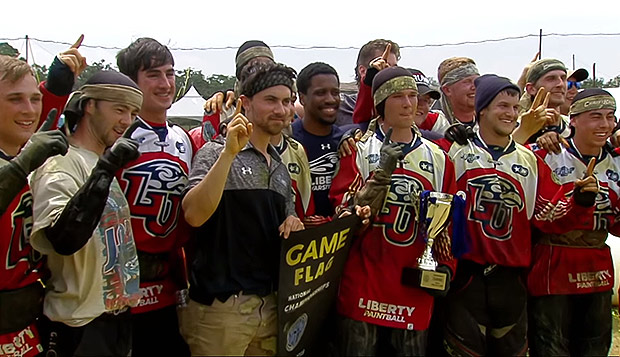 "It's always fun to play the Florida teams because they're generally the top tier and the ones going after us," Flames freshman Corbin Ryan said. "Since this is my first nationals with the team, it is an unbelievable feeling."

UCF captured Class A national crowns in 2014 and 2017, when it defeated Florida Atlantic after the Owls eliminated the Flames in the semifinal round. In Sunday's final, the Flames fell down two men in the opening seconds before rallying to earn the first point with graduate David Dickerson winning a one-on-one shootout before capturing the flag.

Fellow Liberty graduate Christian Campbell, one of the two Flames who were eliminated on the breakout on the first point, was instrumental in winning the second point, taking calculated risks on aggressive moves to put the Knights away quickly.

"Honestly, my back guys shooting those key guys off the break allowed me to get into the snake and have the entire snake to myself, pretty much," said Campbell, who was designated championship game MVP. "If they don't have anybody in the wire, I can just go down and shoot everybody."

With 2:00 left in the first half, UCF was assessed two penalties, leading to an easy point for the Flames, who stretched their lead to 4-0. The Knights conceded another point 35 seconds before halftime, allowing Liberty to seize a commanding 5-0 advantage.

Dickerson scored a kill on a run along the snakeside more than 3:00 into the first point of the 10-minute second half and UCF was assessed a major penalty as Liberty padded its lead to 6-0.

With their backs against the wall, the Knights battled to take their first point with a man coming out of the box to swipe the flag, trimming the deficit to 6-1. But the Flames won the next two points decisively to put the seven-point mercy rule into effect in the final 28 seconds.

In Sunday morning's semifinal round, the Flames edged FAU, 5-4, in a rematch of their only loss in Friday's first round of pool play, by a 6-4 score.

"Even going down points, you've got to stay positive … keep playing our game, stay aggressive, play smart, and play to win," Ryan said. "That's our mentality."

As it did in the first-round match, Liberty opened a 2-0 lead in the first half before FAU responded to get right back in the game. Tied at 2-2, however, FAU picked up two major penalties before the 2:00 mark and gave up a two-man advantage to fall behind 3-2 before Liberty extended its lead to 4-2 before halftime.

The Flames started the second half in a man-up situation, but couldn't capitalize and the Owls trimmed the deficit to 4-3 with 6:46 remaining. FAU then tied it up for a second time with 2:50 to go before Liberty took advantage of a penalty in the final 1:35 to score the winning point, with Campbell and Dickerson running and gunning down the final two Owls before Dickerson captured and stashed the flag with 12 seconds to go.

YouTube rebroadcasts of the Class A semifinal and championship matches are available online.

Liberty's two Class AA lines that advanced to Sunday's playoffs experienced mixed results, with one line sweeping a best-of-three matchup with Massachusetts before being swept by Georgia State and the other losing two out of three matches against Texas A&M in the first round.