Flames doubled up by Gamecocks in SELC Tourney semis 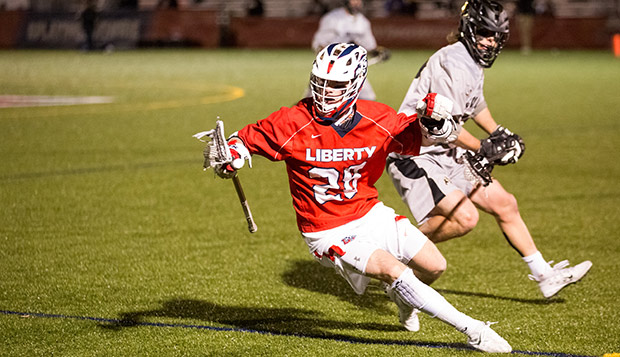 Junior midfielder Chase Wright, who scored twice and added an assist against USC, makes a cut against Colorado at home on March 9. (Photo by Nathan Spencer)

The rematch Liberty University's men's lacrosse team had looked forward to since losing at South Carolina in the second game of the season turned out to be a letdown as the Flames were ousted in the SouthEastern Lacrosse Conference (SELC) Division I Tournament semifinals, 16-8, Saturday at Northview High School in Johns Creek, Ga.

"We came out with a good tempo, but we weren't finding or finishing our shots," Liberty Head Coach Kyle McQuillan said. "They've got some big bodies on defense and were not giving us any easy passes to the goal. We definitely had some chances early, but the shots we were making last night weren't falling for us tonight. We hit some pipes, dropped a few passes, and weren't able to keep pace."

Junior midfielder Chase Wright netted Liberty's only goal of the first quarter to tie the game at 1-1 before South Carolina responded with the final two scores of the period, the last on midfielder Ryan Vallen's sharp-angled running shot with 1:33 to go.

The Gamecocks extended their advantage six minutes into the second quarter and seven minutes later senior attackman Graham Lorber padded the lead to 6-1 as he penetrated through the right side of the box before scoring again 15 seconds off the ensuing faceoff.

"South Carolina was definitely firing on all cylinders," McQuillan said. "They had a lot of success scoring on transition and on outside shots."

South Carolina attackman Addison Lutes stretched the edge to 8-1 before the Gamecocks tallied their eighth straight in the final two minutes to make it 9-1. Flames junior attack Sam Gregory finally snapped the scoring streak with a shot from the top of the box with a minute to go, but USC answered 20 seconds later to take a commanding 10-2 lead into the half.

One bright spot for the Flames was the play of junior midfielder Jimmy Fowler, who won 13 out of 25 faceoffs starting for sophomore Austin Aguilar, who didn't travel with the team due to an illness.

"That was a huge game for him and a good response to give us an opportunity," McQuillan said, noting Liberty had only won 20 percent of its faceoffs at USC.

"We put Ryan in some difficult spots, but Brayden was able to come off the bench and help us out in the second half," McQuillan said.

The Gamecocks all but put the game away by converting the first three goals of the third quarter before the Flames finally got their offense in gear, responding with four in a row to cut the gap to 13-6. Sophomore midfielder Carter Elliott started the surge with a tough-angled shot from the left side before Wright sent a seeing-eye shot through the five hole from the top of the box. Gregory and sophomore attack Derrick Esh followed with back-to-back goals to pull the Flames within seven.

Elliott kept the comeback alive less than five minutes into the fourth quarter, firing a shot under the stick of South Carolina's goalie assisted from Wright behind the net, making it 13-7. Lutes netted back-to-back scores from the right side, the last on a submarine shot after emerging from behind the right side of the cage. The Gamecocks added two more goals before Liberty capped the scoring in the final 40 seconds when Gregory sent Britton a short pass from behind the cage for a catch and release finish in front.

"South Carolina (16-0, ranked third in the MCLA Coaches Poll) has had a fantastic season and they deserve to be in the position they're in," McQuillan said. "They will be a formidable team not only in the SELC final, but in the MCLA Tournament as well."

The Flames (8-5, ranked 11th) are hopeful that they will make the cut to receive an at-large bid to the May 7-12 National Championships in Salt Lake City for the first time in the five seasons they have competed at the Division I level.

"We feel good, feel like we belong," McQuillan said. "This is the best position we've put ourselves in in order to make it to nationals and I told the players they should be optimistic that this wasn't our last game."

There are nine automatic bids from conference champions, but Liberty should have a good shot to receive one of the seven at-large bids that fill out the 16-team tournament field.