Lady Flames' Bouton NAIGC All Around runner-up in Texas 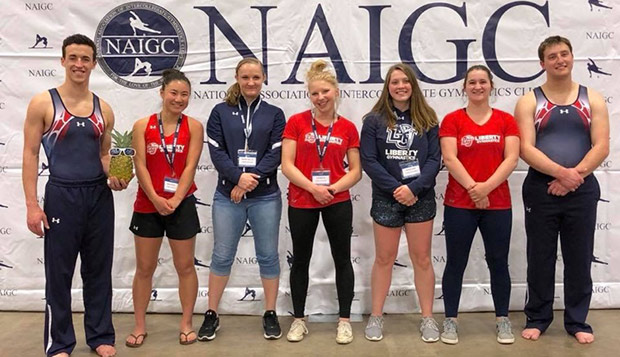 The five women, including Julie Bouton (center), and two male gymnasts who represented Liberty at the NAIGC championships in Fort Worth, Texas.

Competing in front of a crowd with many family and friends from her home state of Texas, Liberty University junior Julie Bouton turned in one of the best performances of her career in Saturday's All Around finals at the National Association of Intercollegiate Gymnastics Clubs (NAIGC) Championships at the Fort Worth Convention Center.

She stuck most of her landings in all four events and finished second overall out of 16 finalists in Level 9, the highest classification at the meet, which attracted more than 1,300 male and female gymnasts from around the country. It was the highest individual placement at nationals for a Liberty gymnast in the All Around competition. Last year, the Lady Flames placed fourth in the team competition, their best-ever showing.

"Julie qualified 10th or 12th (after preliminaries) so she stepped it up and just killed it," Lady Flames Head Coach Tim Kappel said, noting that the gymnast that beat her is actually an NAIGC alumna. "She fell on the beam in preliminaries, but made up for it today with the highest placement we have ever had. In my eyes, it was a victory for Julie since she was the highest-placing current collegiate athlete."

Bouton placed eighth on the vault, the only event she qualified to the finals in individually, with a score of 9.275, and recorded identical 9.4 scores on the balance beam (placing her second out of 18 competitors), floor exercise (fifth), and uneven bars (eighth). Her total score of 37.475 was less than a point behind University of California-Sacramento alumna Molly Stuckey's winning total of 38.125 and 0.25 ahead of the third-place total of Jacqueline Holland from the University of Texas (37.225).

"It was a good way to finish up the year with one of the best meets of her life," Kappel said. Bouton is from Flower Mound, Texas, about a half-hour northeast of Fort Worth. "She really did have a great day, in front of a home audience. She was as solid as she could be. It's always fun when you do it on your home turf. She was undefeated all year."

The Lady Flames were at a disadvantage in Thursday's preliminaries by having to perform first in their session, which included only East Coast regional teams, in the floor exercise.

"Preliminaries went OK, but we got a bad draw," Kappel said. "We were doing really well in spite of that but ended up taking a lot of very uncharacteristic falls on the beam, which knocked us out of contention for the team finals."

Also for the Lady Flames, Christie Smith competed in the All Around, gaining invaluable experience to conclude her freshman season.

"She did pretty well on the vault and floor and improved a lot in the uneven bars," Kappel said. "Unfortunately, she fell on beam at a time we needed her to hit. She still ended on her best meet of the year."

Junior teammate McKella Johnson qualified for the vault finals, placing 17th (8.775), but was the first gymnast to miss the cut for the All Around finals and next person up for the uneven bars finals.

In the men's competition, senior Cameron Streeter and graduate Austin Minuto missed qualifying for finals for any individual event or the All Around.

"They still ended on a pretty good note as they both hit on six events without any major mistakes," Kappel said.