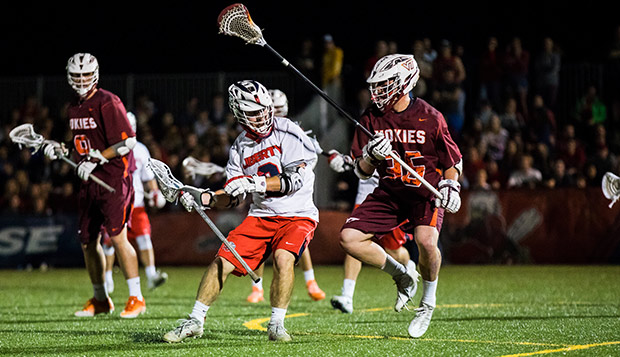 The SouthEastern Lacrosse Conference (SELC) Northwest Region title and No. 1 seed going into the April 20-22 SELC Tournament was up for grabs in Friday night's showdown between Liberty University's ninth-ranked MCLA Division I men's lacrosse team and No. 10 Virginia Tech.

It was the second home loss of the season for Liberty (7-4), both against a top-10 opponent after falling to No. 5 Colorado on March 9.

Sophomore attack Caleb Britton started the scoring for the Flames by sneaking out from behind the right post and beating Virginia Tech goalie Matthew Herrmann through the five hole on a point-blank bounce shot.

The Hokies rallied to take a 2-1 lead on a left-handed wraparound shot into the upper netting by attack Chris Low and a fast-break finish by attack Connor Fries set up by a mid-field ground-ball pickup and assist from defender Corey Buck.

Less than four minutes into the second quarter, Virginia Tech attack Noah Dewey slanted back from the end line into the right side of the box where he rifled a shot over the stick of Flames sophomore goalie Ryan Reynolds. Just over two minutes later, Fries emerged from behind the left side of the cage and netted a top-shelf fadeaway shot for a 4-1 advantage.

"It's definitely not how we planned to start off," said junior attack Sam Gregory, Liberty's leading scorer on the season who, like Britton, was held to one goal. "Our defense played well, but offensively, we missed the mark on several key plays. At the end of the day, we just couldn't put the ball in the back of the net."

Sophomore midfielder Carter Elliott cut the deficit to 4-2 just 3:13 before halftime by making a run from right to left across the top of the box and rocketing a shot past Herrmann. Then, 14 seconds later, Gregory received a pass in the center of the box and faked high before bouncing a shot low into the back of the net, pulling the Flames within 4-3.

Fries extended Virginia Tech's lead to 5-3 early in the second half and the Hokies pushed it to 6-3 with 8:26 left in the third when Wian Coetzer drove down the right side of the box and sent a pass back in to fellow midfielder Danny Riley for a finish out in front. Just over three minutes later, Dewey gave the visitors a 7-3 advantage with an overhand shot from the right side.

At the 3:50 mark, Virginia Tech midfielder Gerard Martirano received a feed from Fries from behind the net for a point-blank putaway, prompting a Liberty timeout. Hokies midfielder Bogdan Dragacevac won the ensuing faceoff and Martirano converted another behind-the-cage assist from Fries to make it 9-3 going into the fourth quarter.

"You don't lose the game in one specific area, but they won the overwhelming majority of faceoffs tonight," Flames Head Coach Kyle McQuillan said after Dragacevac won 17 of 20 on the night. "Basically, Virginia Tech was scoring and getting the ball back and you can't win a lacrosse game that way."

Less than two minutes into the fourth quarter, Fries scored on a sharp-angled shot from the right side after picking up a loose ball off a rebound before Flames freshman midfielder Mateo Zumpano ended Liberty's scoring drought two minutes later.

However, Riley responded a minute after that by whipping a shot from the top of the box past Reynolds, preventing the Flames from jumpstarting their comeback.

Elliott made a dynamic move through the right side of the box and capped it with a running shot to trim the gap to 11-5 with 7:26 remaining in regulation before sophomore attack Derrick Esh completed the scoring with 25 seconds to go.

The Flames will face the winner of Saturday's Georgia-Georgia Tech match in the opening round of the SELC Tournament, near Atlanta, next Friday night. The winner of the tournament receives an automatic bid to the May 7-12 MCLA DI National Championships in Salt Lake City.

"Hopefully, we learn from our mistakes and we use this as motivation," McQuillan said. "What we can hope for is playing our way into the championship game and getting another shot at Virginia Tech, but we've got a lot of really stiff competition to even get there. We've got a lot to prove. ... It's going to be a dogfight."