Gymnasts aim to land in finals at NAIGC nationals in Texas 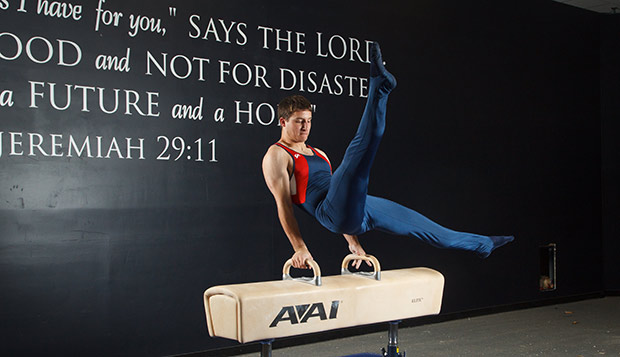 Cameron Streeter, shown practicing on the pommel horse, and Austin Minuto will represent Liberty's men this week in Texas.

The five women's gymnasts — juniors Julie Bouton, McKella Johnson, and Leah Corpora and freshmen Christie Smith and Marissa Emery — will try to match or better their fourth-place finish at last year's nationals in Columbus, Ohio, though the competition will be even stronger in Texas.

Bouton, Johnson, and Smith will compete in all four women's events (vault, floor exercise, uneven bars, and balance beam) to be eligible for the 16-gymnast All-Around individual finals, while Corpora and Emery will focus on the floor and beam.

"Julie on the floor placed third at nationals last year and has won that event at every single meet she's gone to, in the All-Around and the individual competitions," Kappel said. "She and McKella have placed first and second in every meet we've gone to. They did really well at last year's national meet and hopefully the younger gymnasts can get in there and handle the pressure and perform as well."

Close to 250 colleges and universities from across the country will be represented, with about half of those bringing complete teams for a total of more than 2,000 student-athletes.

"East Coast schools are generally the strongest in the country, so same teams that we have competed against already will be out there," Kappel said, noting that the only team Liberty's women have lost to this season is Penn State at a meet hosted by JMU.

"They count your top three scores in each event so there is no room for error for us in the vault and on the bars," Kappel said. "For the most part, we are at the top form we've been at all year."

"Club programs for men's gymnasts are getting very competitive because those guys have nowhere else to go," Kappel said, noting that Streeter and Minuto will compete in the men's open division in Session 3 beginning with stretching and warm-ups at 5 p.m. (CST).