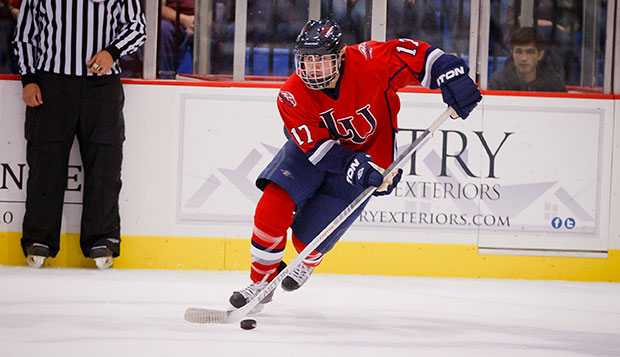 The Liberty Flames Division I men's hockey team fought hard to stage its second upset of a No. 1-ranked ACHA team this season when it took on Arizona State University Thursday night at Oceanside Ice Arena in Tempe, Ariz. This time, the Flames (14-9-2) overcame a 3-0 deficit against the Sun Devils (23-4) by scoring twice in a span of two and a half minutes late in the second period before tying it up at 3-3 with 12:25 remaining in regulation. The Sun Devils found the five-hole to net the game-winner in a 4-3 shootout victory.

The final score was a replica of the team's last meeting, on Oct. 29, 2011, also won by ASU in a shootout during the ACHA Showcase tournament in Springfield, Ill.

"The big difference (this time) was we went down 3-0 and had to battle back," said Flames head coach Kirk Handy. "When you play a top team it is hard to win when you spot them a three-goal lead. On the positive side we battled back and tied the game up."

The Flames knocked Ohio out of the top spot with a 4-3 triumph Oct. 27 at the LaHaye Ice Center. (ASU overtook Ohio at No. 1 in the next week's poll.)

ASU was able to regain momentum in the final half of the third period, forcing a scoreless five-minute overtime before both teams' goalies took center stage in the shootout.

The Sun Devils' Joe D'Elia stopped all eight of the Flames' chances. Flames goalkeeper Blair Bennett rejected the first seven Sun Devil attempts before allowing ASU defender Darcy Charrois to slip one between his legs into the back of the net for his second shootout goal in his three seasons at ASU.

Before the shootout, the Flames outshot the Sun Devils 35-31, with D'Elia making 32 saves and Bennett 28.

"Blair had a strong game, not only in the shootout, but also in the third period and overtime," Handy said.

Bennett saved a shot by Jordan Young to help stave off a fourth ASU power play before falling on his back to cover the rebound of a shot by Charrois that struck off the inside of the left post with 5:55 to go in the third period.

Then, after the Flames extinguished a fifth and final power play in the opening minute of overtime, Bennett blocked Kale Dolinski's shot from his stomach with 1:45 to go.

"Our PK played very well," Handy said of his team's penalty-killing performance against the Sun Devils, led by forwards Stephen Collins and Colin Hekle, who are tied for fifth in the ACHA with seven power-play goals apiece.

All six of the goals scored in regulation came at full strength.

Ryan Clark gave ASU a 1-0 lead with 7:11 left in the first period off Kyle Bowen's first assist of the season.

Following a turnover by Clark seven minutes into the second period, Rick Turner, Liberty's leading scorer with 50 points, nearly knotted it up on a breakaway chance, but his shot clanged off the crossbar and D'Elia stuffed Ryley Egan's follow. The Sun Devils quickly capitalized when Dolinski finished a one-timer in the slot off a feed from Hekle to put ASU on top 2-0 with 11:29 to play in the period. Less than three minutes later, the Sun Devils seized a 3-0 advantage when Danny McAuliffe scored from point-blank range off Hekle's 23rd assist from behind the cage.

Fighting out of a three-goal hole, Turner ignited a rally for the Flames by setting up Brent Boschman in front of the net to cut ASU's lead to 3-1. Moments later, Lindsay LeBlanc made it a one-goal game by finishing off a two-on-one break, with Egan distributing his 20th assist from the right side on the odd-man rush.

Andrew McCombe and Tyson Street were denied by D'Elia on a counterattack and breakaway late in the second period and early in the third, respectively, before Flames freshman Steven Bellew finally netted the equalizer on a slapshot from the left side. Danny Logan and Turner were credited with assists after winning a faceoff on the offensive end.

Logan, Egan and Turner missed Liberty's first three opportunities in the shootout, with Logan losing control of the puck when he went to deke D'Elia. Boschman went fourth before McCombe's left-handed shot glanced off the crossbar. D'Elia shut the door on Bellew's eighth and final attempt.

Liberty travels 100 miles down Interstate 10 to Tucson to face No. 18 University of Arizona in the first of two two-game series tonight at 9:30 (EST). Handy hopes the Flames can finish more opportunities against the Wildcats, who they will host on Jan. 25 and 26.

"We will be ready to play (Friday)," he said. "We just need to tweak our game (and) play within our system. We need to play disciplined."