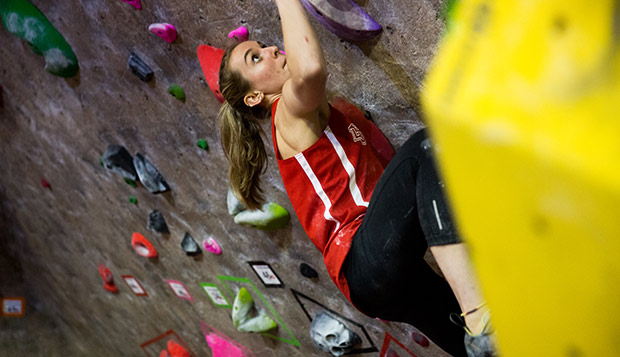 Lady Flames freshman Steph Wilson, who is from England and lives in Canada, will join Tori Perkins at the USA Climbing Collegiate Nationals. (Photos by Andrew Snyder)

Liberty University's rock climbing team hosted its second Collegiate Climbing Series (CCS) competition of the season, the Rise Up Collegiate Local on March 3 in downtown Lynchburg, Va., and nearly took all top five places, as they had in the fall on Oct. 28.

"It came down to attempts, and Keegan had a lot more falls than Mark and Jonathan needed more attempts than both guys (to reach the top of the wall)," Liberty Head Coach Elliot Gaunt said.

Perkins and Wilson will represent Liberty as its first two qualifiers at the USA Climbing Collegiate National Championships, set for April 20-21 at Momentum Indoor Climbing in Katy, Texas, west of Houston.

"There will be close to 150 competitors, including 15 (in each gender) from our Capital Region and 20 each from the Northeast, Rocky Mountain, and Texas regions," Gaunt said. "If they wanted to, (Perkins and Wilson) could compete in the bouldering, sport (routing), and speed divisions, but they're going to focus on sport climbing."

Gaunt and his staff are preparing to host The Golden Bolder, a bouldering competition open to all Liberty students, April 13 from 4-11 p.m. at the LaHaye Recreation and Fitness Center's Rock Wall. There will be beginner, intermediate, and advanced categories with awards given to the top male and female finisher in each, as well as the top crash pad stacking and dyno competitors.

Preregistration is $5 in advance or $10 on the day of the event. Those who sign up online by Friday receive a Golden Boulder T-shirt. 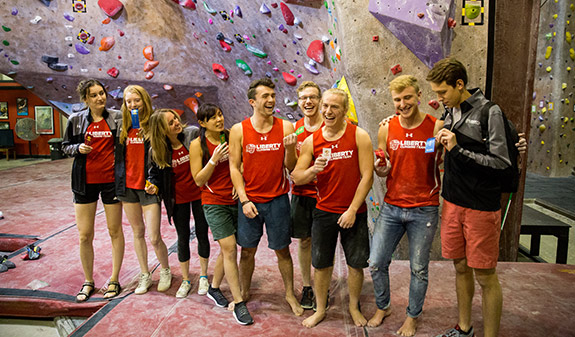 Rock climbing team members share a laugh after a local competition at Rise Up in Lynchburg, Va.