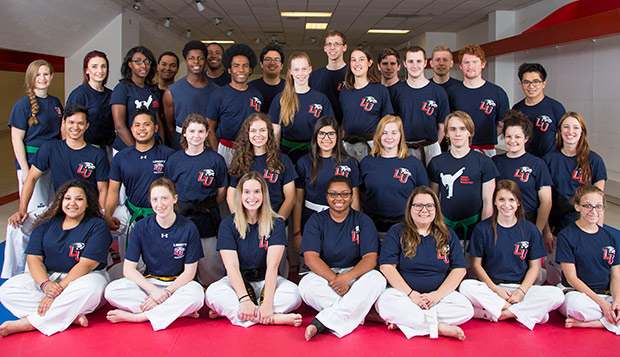 Liberty University's taekwondo team earned a total of 12 gold medals in various belt and weight classes in both fighting and forms during its first Atlantic Collegiate Alliance of Taekwondo (ACAT) competition of the spring semester, March 3 at the University of North Carolina in Chapel Hill, N.C.

"There were eight teams represented at UNC and every athlete we entered medaled but one," said Liberty Head Coach Tom Childress, who sent 26 student-athletes to the competition.

Liberty's contingent will still be undersized compared to East Coast Taekwondo Coalition (ECTC) members such as Army, Brown, Cornell, MIT, New York, and Rutgers. Athletes from approximately 65 colleges and universities will be competing.

"We've grown quite a bit," Childress said. "All of our team members have a chance to win their individual divisions and we could have multiple medal-winners in some. It's all about the individual in the ring and what they're able to do that day. All we ask is they go out and do their very best. The big thing is to go out there and have fun and enjoy it and represent Liberty very well."

Siff will be the Flames' only returning national champion competing, and he will be in the black belt rather than the red belt division this time. Seniors Moriah Martin and Sadie Newton will also contend for black belt medals while Henderson, a yellow belt national champion as a freshman in 2015, will vie for a red belt title.