No. 1 Lady Flames fend off Bulldogs for second national title 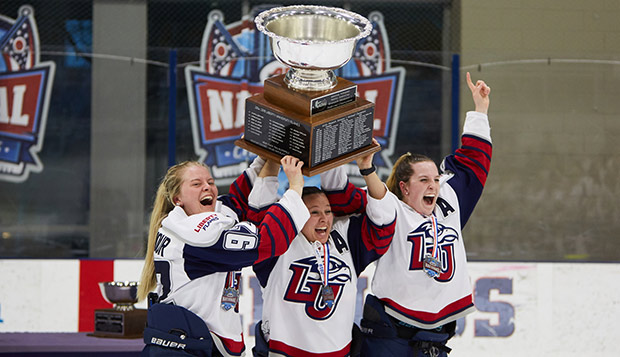 Graduate goalie Chantal Kerr, who started between the pipes when Liberty captured its first national title in 2015, was sensational in the net once again for the Lady Flames, stopping numerous dangerous scoring chances by the Bulldogs.

"Chantal played lights-out," said Liberty Head Coach Chris Lowes, who made the call to start Kerr over sophomore Nadia Rupoli, who had posted a shutout in the quarterfinal-clinching win over Minnesota. "We had two goalies, and both were undefeated so they were two great options. It was kind of a gut feeling (to start Kerr) and she stood up."

Adrian (28-3-1), which outscored opponents by a 164-30 margin in the regular season, came out on the offensive to start the contest and had the better quality scoring chances in the first period, in part due to penalties assessed to Liberty.

The Lady Flames, who held a 119-22 regular-season advantage on their foes, had a goal called back by a penalty in the first period, which ended in a scoreless tie.

Moments after killing off a penalty to start the second period, Liberty went on a power play of its own and capitalized at the 15:35 mark when junior forward Rachel Gibson fired a slap shot from near the left boards, blocked by Adrian goalie Alison Dungey. Lady Flames freshman forward Shelby Bradford came out from behind the cage to pounce on the loose puck near the left post, chipping it past Dungy for a 1-0 advantage.

"She was pretty awesome all tournament," Lowes said of Bradford, who was named tournament MVP.  "She's a big-game player and to play with her type of confidence is pretty amazing. She shows up in big games and she did it again here."

The Bulldogs mounted a series of quality scoring chances over the rest of the period, but Kerr repelled each one, making back-to-back kick saves with 8:45 to go before blocking a point-blank shot from the left crease. A slashing penalty put Adrian back on the power play and forward Danica Polson uncorked two high-percentage shots stopped by Kerr.

Through two periods, the Bulldogs held a commanding 29-13 shot advantage on the Lady Flames.

Liberty turned up the pressure from the outset of the third period to even the scoring chances and neutralize Adrian's attack. Bradford stole the puck and narrowly missed on another close-range scoring chance, crashing into Dungey as the puck slid just wide of the left post.

Sophomore forward Alex Smibert, the Lady Flames' leading scorer in the tournament, eventually provided a critical score with 4:30 remaining in regulation. She intercepted the puck just inside the red line and skated it into the high slot before sniping her fourth goal in four games past Dungey into the top left corner, lifting Liberty to a 2-0 lead.

Adrian forward Kaillie Hardie pulled the Bulldogs back within 2-1 with 42 seconds left by trapping an entry pass from Jessica Harrison and slamming a backhanded turnaround shot past Kerr, preventing her third shutout in six games this season, and second in four games at nationals

A day after dominating Colorado, 12-1, in the semifinal round, the Lady Flames were in a dogfight to the end of the championship game. Liberty preserved its one-goal lead by smothering the puck on a defensive zone faceoff in the final three seconds of the third period.

"They outshot us and outplayed us for a good chunk of that game," said Lowes. "That's playoff hockey. You've got to find a way to survive. Hockey can be brutal and I feel for Adrian because we've been in that situation."

The Lady Flames were eliminated by Miami (Ohio), the team they defeated for their first title, in the 2016 semifinals and 2017 championship game.

Liberty and Adrian were ranked first and second, respectively, for 14 of this season's 15 ACHA DI polls, with the Lady Flames reclaiming the No. 1 spot from the Bulldogs by beating them, 4-1, on their home ice on Nov. 17 in Michigan.

The Lady Flames (29-3) finished 21-0 on the road this season and only played seven ACHA games at the LaHaye Ice Center, where third-seeded Michigan State ended their 19-game winning streak on Jan. 13.

After being held in Columbus for the past two seasons, all five levels of the 2019 and 2020 ACHA National Championships will take place in Dallas. 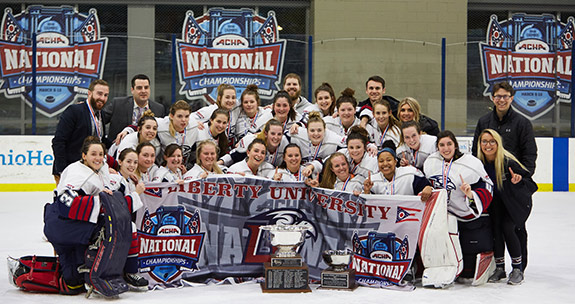