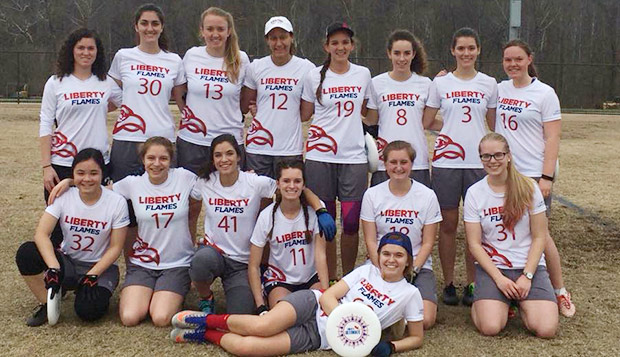 Playing on the same fields where the Mid-Atlantic Regional Championships will take place in late April, Liberty University's women's Ultimate team advanced to the final of a four-team tournament before falling to Massachusetts for the second time, 15-9.

The Lady Flames finished 2-1 in pool play and won their semifinal match against Smith (Mass.) College, 11-7.

"We played really well," Liberty Head Coach Jonathan Mast said. "We were working on a particular offense that we have been trying to execute as a team and it really clicked and we went up 6-1 right away."

In pool play, Liberty edged Smith, 12-10, before defeating Elon (N.C.) University, 12-8, and dropping its first meeting with UMass, 15-8. Lady Flames freshman Jennifer Vachon dove to make a game-changing catch in the end zone to spark a comeback in that game after trailing 8-2 early.

Freshman Mikayla DiSarle, who had never played Ultimate before this year, had a standout performance over the weekend, leading the Lady Flames in goals with 10. Complete tournament results are available online.

The Lady Flames will seek to qualify for their third regional appearance by placing in the top four in the Virginia Sectional Championships, set for April 14-15 at JMU in Harrisonburg, Va.

"At our first two tournaments (in October), we didn't perform as well as wanted to, but the scores haven't reflected how much they've learned or how well they've played," Mast said. "All the tournaments leading up to sectionals we're using as practice. We had several things that we were trying to work on as a team and had some real breakthroughs this tournament."

This Saturday, the Lady Flames will host their seventh-annual Hat Tournament, a co-ed fundraiser at the Liberty Intramural Complex and are anticipating 120 players from Washington, D.C., south to Blacksburg, Va., to play in it prior to the start of Spring Break. Besides regional club players, student-athletes from Richmond, Mary Washington, Roanoke College, Virginia Tech and other area colleges will compete.