Wrestlers start NCWA Grand Nationals on a roll in Texas 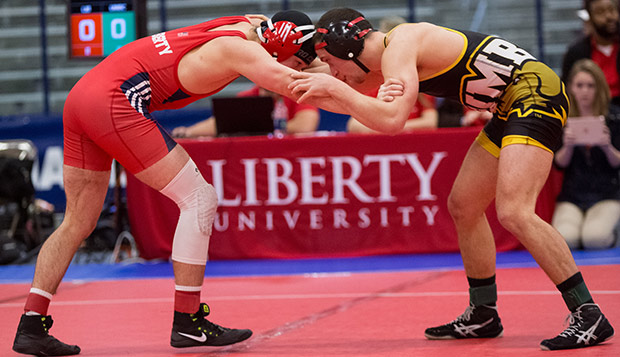 On the opening day of the NCWA Grand National Championships at the Allen Event Center in Allen, Texas, Liberty University's men's wrestlers got out to a strong start, gaining momentum as they seek an individual tournament crown for the second time in four years.

The Flames, who won the NCWA National Duals tournament earlier this season at the LaHaye Ice Center, won 13 of 15 bouts in Thursday's Rounds of 64 and 32, putting them in excellent position going into Friday's second day of competition to complete the sweep, as they did in 2015.

In the Round of 32, Flames 125-pound freshman Keegan Smith, seeded 13th, stayed in the championship bracket with a 7-3 decision over MIT's Matthew Chun. Then, at 133, freshman Blake Justis, seeded 11th, picked up pin points by decking BYU's Jansen Engelbrecht in 4:19.

Robinson won his second match of the day by fall, needing just 2:10 to pin Washington State's Zachary Moore. Stewart then picked up his second major decision in as many matches, this time by a 10-2 margin over Penn State-Worthington Scranton's Brock Lieberman.

Texas A&M's Tyrae Carter dealt Liberty its first loss with a 12-9 decision over Flames fourth-seeded 149-pound freshman Chad Cantrell, who is grappling with a knee injury sustained in the Mid-Atlantic Conference tournament.

Complete results, including Thursday night's Round of 16, are available online and the tournament is being streamed live pay-per-view FloWrestling.org.