Gymnasts training to peak at NAIGC Championships in Texas 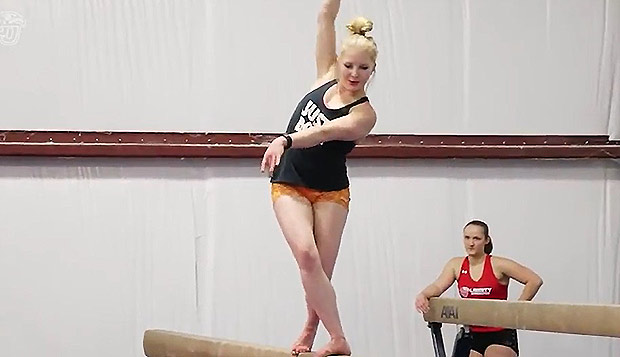 Liberty University's men's and women's gymnastics teams have performed well in their first two National Association of Intercollegiate Gymnastics Clubs (NAIGC) competitions at Clemson and JMU this spring. Head Coach Tim Kappel plans to bring all six of the Lady Flames and both Flames gymnasts to the (NAIGC) National Championships set for April 13-14 in Texas.

"We have a really good club team," Kappel said. "It's just a step below NCAA. … Last year was the first time the team had ever qualified to finals at the National Championships and ended up ranked fourth in the country and had three girls in the top 15 in the country."

The eight gymnasts train at both Liberty's gymnastics studio in The Plaza shopping center and Kappel's Pure Gymnastics facility on Old Forest Road in Lynchburg.

"We're going strong and trying to finish out our senior years out strong," said gymnast Cameron Streeter. "We have plenty of room for improvement, but we're looking toward the rest of the season and nationals in Texas."