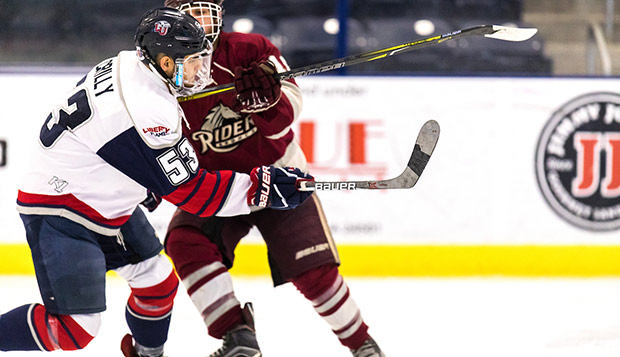 Senior center Matthew Perri scored the first two goals in the first period of Sunday's game and assisted the only goal in the second period to lift the Flames (19-8-0)  to a 3-0 lead on the Miami RedHawks (23-7-2), who had advanced to the past two ACHA DII Final Fours and were eliminated by the Flames in the 2016 semifinals.

"Everyone showed up and played well, but we felt that Perri was really the catalyst behind that win today," Flames Head Coach Ben Hughes said. "His first-period effort really set the bar for everybody else."

Perri skated through the left circle and lifted the puck inside the top left corner for the game's first goal midway through the first period. He scored the second goal from out in front on a power play, and assisted the third by winning a faceoff back to senior defenseman Ryan Sidun, who launched a wrist shot from the top of the left circle into the upper netting with 6:57 to go in the second.

The RedHawks cut into the Flames' advantage in the closing seconds of a power play with 16:15 to go in the third when defenseman Wesley Guenther received a pass out of the left corner from forward Chad Olson and released a wrist shot from the high slot that got past Scott inside the right post.

Liberty all but iced the victory with 4:42 remaining in regulation when Blake Flanders intercepted a failed clearing attempt by a Miami defenseman at the top of the right circle and sent the puck across the crease to fellow freshman forward Michael Niederer for a top-shelf finish.

With 36.5 seconds left, after a few missed opportunities over the previous minute, sophomore forward Jamie Crane skated the puck into an open net for the game's final goal.

"With Blake, the more shots he faces, I think the better he plays," Hughes said.

In Saturday's second round, after receiving a first-round bye, Liberty (seated third) scored a 9-3 triumph over 10th-seeded Rider.

"Rider has beaten us before this season and their goalie was strong, but the guys brought it Saturday," Hughes said.

Senior forward Marshal King netted the equalizer in the first period and goals by freshman defenseman Kyle Martin and sophomore forward Andy Clarke lifted Liberty to a 3-2 lead that it would not relinquish. King tipped a shot by Martin in on the power play to start the second-period scoring before sophomore center Caleb Toone scored 15 seconds later to extend the Flames' advantage to 5-2.

A minute later, Perri stretched Liberty's lead to 6-2 before King completed his hat trick and Crane scored for the final goal of the second period. Martin capped the Flames' scoring in the third.

The three opponents in Liberty's pool for the March 9-13 ACHA DII National Championships in Columbus, Ohio, have already been determined. The Flames will be seeded third in their pool and face three teams they have never played before: Aurora (32-0 out of the Central Region), Northeastern (14-5-2 out of the Northeast), and Denver (19-11-2 out of the West).