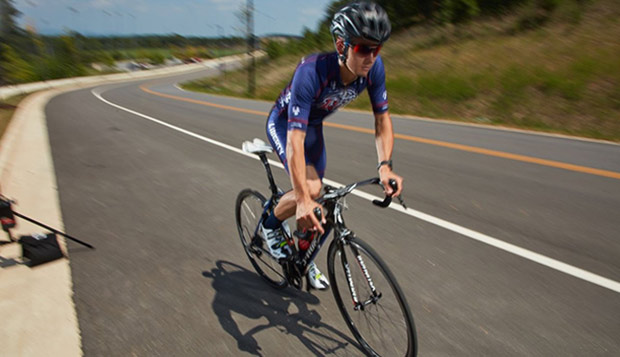 Thomas Sonnery-Cottet is a sophomore member of the Flames' cycling, swimming, and triathlon teams.

When riders from Liberty University's men's and women's cycling teams travel to Williamsburg, Va., on Saturday for a road race hosted by the College of William & Mary and Charlottesville, Va., on Sunday for a criterium hosted by the University of Virginia, it will be the first of six weekends out of the next eight with Atlantic Collegiate Cycling Conference (ACCC) races, leading up to the May 4-6 USA Cycling Collegiate Road National Championships in Grand Junction, Colo.

"It's about to get really busy," said Flames and Lady Flames Head Coach Parker Spencer, who also coaches Liberty's men's and women's triathlon teams and its first-year men's swimming & diving team. "We're pretty much racing two races a weekend from now until April."

Besides Liberty Assistant Coach Van Phillips, who will travel with the cycling team for most of its races, Beni Thompson, a former professional triathlete from Chile, will serve as an assistant cycling and triathlon coach under Spencer, who formerly served as her trainer. Thompson stopped competing more than 20 years ago to raise five children before recently getting back into the sport, winning her age group at the Half-Ironman World Championships and placing seventh in her age group at the Ironman World Championships in Kona, Hawaii.

"She has really helped with motivation on the women's side, having her there and having a strong presence," Spencer said. "We just added a senior, Kaitlyn DeJoseph, who will really help. She ran track for Liberty before she got into cycling and is also dabbling in triathlon."

This year's cycling team features six female competitors and 13 men while the triathlon team has 13 women and 20 men.

Cyclists who have been training out of Liberty's indoor studio in Candlers Station Shopping Center throughout the winter months are ready to put the rubber to the road this weekend, when the Flames will try to match or improve on their second-place finish to Duke in the ACCC road season standings.

"Even though we did a few races in mountain biking, it's hard for those athletes to keep up the motivation and keep working hard when they don't have the races in the fall," Spencer said. "Now we'll see where we stack up and who will be able to go to nationals."

The Flames' men's team will return Jake King, Liberty's best cyclist it has had to date who placed fourth at nationals in 2016 before taking last year off to get married to former Lady Flames women's cyclist Marie Sonnery-Cottet, the older sister of Flames sophomore cyclist, swimmer, and triathlete Thomas Sonnery-Cottet, in her homeland of France. Jake King (the younger brother of former Tour de France cyclist Ben King) is finishing up his bachelor's degree in business online from near Charlottesville and will compete in a few regular-season races and go to nationals despite also working full-time.

Liberty will host its first ACCC cycling road race near campus on March 17, starting at the Hydaway Outdoor Recreation Center, with a full road enclosure on the eight-mile loop along Camp Hydaway, Lone Jack, and Sunnymeade roads.
Then on March 18, the Flames and Lady Flames will travel to Blacksburg, Va., for a criterium hosted by Virginia Tech.