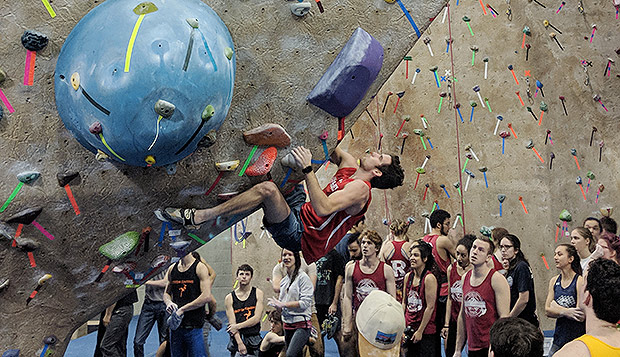 Liberty University's men's and women's rock climbing teams, which compete in the Capital Conference, traveled to Chatham, N.J., this past weekend to participate in their first competition of the Spring semester, a Northeast Conference local event that drew 190 climbers to The Gravity Vault.

Lady Flames freshman Tori Perkins demonstrated her technical precision in sport climbing by placing first out of 35 contestants in the women's routing competition with a score of 11,700 points

"She flashed the four hardest routes that they had and she executed all the moves and the flashes very well," Liberty Head Coach Elliot Gaunt said, noting that the facility offered similar difficulty as those at the LaHaye Recreation & Fitness Center's Rock Wall. "She was able to watch her competitors to get data from them and knew exactly what to do, and with coaching and determination was able to flash each one."

The Flames and Lady Flames entered climbers in men's and women's speed climbing and sport climbing as well as men's bouldering, posting strong showings in each division.

Graduate Mark Chauvette placed seventh out of 58 men's bouldering contestants with a score of 21,500 points, followed by junior teammate Keegan Nichols (15th with 19,200 points), and senior Brandon Bajramoski (17th with 17,200).

Sophomore Jonathan Anderson finished seventh out of 43 men's sport climbers with 10,300 points in his route, followed by Flames graduate Caleb Peacock (11th with 9,700) and sophomore Connor Ellis (13th with 9,300 points).

In men's speed climbing, Liberty graduate student Zach Lamothe placed 11th out 25 competitors in 18.84 seconds in his first time competing in that event.

"Unlike route climbing, which is a very technical sport, speed climbing is set up with specific holds with exact orientation and is time-based, requiring powerfully fast movement," Gaunt said.

Besides Perkins, the Lady Flames had two top-20 women sport climbers, senior Eliane Zalewski, who finished 14th, and senior Ruth Jang, who came in 16th with 8,200 points. Jang also finished fifth out of 16 competitors in speed climbing in 20.91 seconds, after competing in that event in Tennessee in the Fall semester.

Gaunt will send 13 members of his travel team to Christiansburg, Va., this Saturday for a 3 p.m. Collegiate Climbing Series competition at Crimpers Climbing called "Allez," a French word for "go" chanted by climbing enthusiasts.

On March 3, Liberty will host its second event of the year at Rise Up in downtown Lynchburg, its final competition before the USA Climbing Collegiate Nationals set for April 20-21 at Momentum Indoor Climbing in Houston.

While the Capital Region does not have a qualifying event, a total of 10 men and 10 women from its 15 schools can represent it at nationals, based on performances in local competitions and Gaunt plans to send at least Perkins and fellow Lady Flames freshman Steph Wilson to Houston.