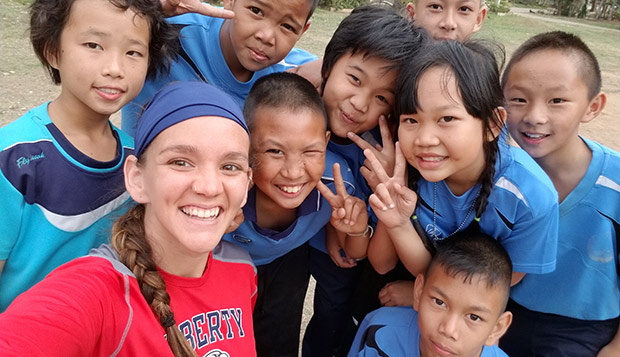 Hilary Kline, a senior majoring in social work, takes a selfie with a group of youth she taught Ultimate to in Thailand.

After spending many of her teenage years on mission in various countries in South America, Liberty University senior Hilary Kline experienced her first trip to an Eastern culture over Christmas Break, traveling to northern Thailand from Dec. 19-Jan. 19 to introduce the sport of Ultimate and share the Gospel with hundreds of youth.

"I was able to go into five different middle schools and high schools, and within those, I was able to teach seven different grade levels Ultimate Frisbee, which was absolutely incredible," said Kline, a senior handler for the Lady Flames. "The very first day, we were told to expect 25 to 30 kids and there were a little over 70, but we just adjusted the drills and were able to communicate clearly and effectively the art and the fun of Ultimate Frisbee."

The sport caught on quickly and the missionaries who Kline served alongside — a couple from Brisbane, Australia, who have lived in Thailand for the past eight years — plan to incorporate it into their ministry outreach.

"It's just another foot in the door, another opportunity for them to minister to the lives of these people in a practical and fun way," Kline said.

By the end of the one-day workshops Kline conducted at each school, students were clamoring over the possibility of playing the sport.

Days after Kline flew back to Lynchburg, Va., for the start of her final semester at Liberty, teachers from multiple schools met to talk about possibly forming teams at each of the area schools to play tournaments and pickup games. The missionaries have ordered discs to be shipped in from China.

"It's crazy, just so wild to think that that can be happening," she said. "What I'm coming away with is a sense of the passion and the availability and the need for something like this, just walking around and seeing open playing fields and the facilities that they have and envisioning the impact of what a team to this specific location could have."

Besides the sports platform to her time in Thailand, Kline — who will graduate in May with a degree in social work — was able to communicate the message of Jesus Christ to younger students in English classes and inmates in a local prison, before and after Christmas.

"I brought 1,000 candy canes to share the legend of the candy cane, which talks about Jesus," Kline said. "I was able to share the legend with over 600 individuals — groups of children at schools, community groups, and at a really established prison ministry we were able to share that with them as well — really awesome opportunities. What was cool was seeing how receptive they were, not only to Ultimate, but to spiritual matters."

She said the people in Thailand are predominantly Buddhist and don't celebrate Christmas, which was just another school day for the students there. But they were studying Western culture and were curious about ways Americans and others observe the birth of Christ.

Kline, who picked up Ultimate during her travels though Chile, Argentina, Uruguay, Ecuador, and Peru, South America, after serving on her first mission trip in Belize, Central America, would be interested in returning to Thailand with her Liberty teammates in the near future.

"Most, if not all of us have been on mission trips at least once in our lives, which is really exciting," Kline said. "My passion is for everyone to get a chance to experience another culture and see what God can do through you. It was absolutely fantastic and refreshing to practice the rhythms of church daily, with (the missionaries), to communicate the love of Christ together and then spread that to the Thai people we met every day." 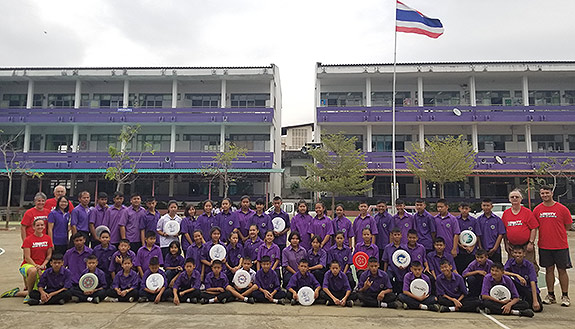 Hilary Kline (front left) and the missionaries from Australia (back left) pose after a workshop.