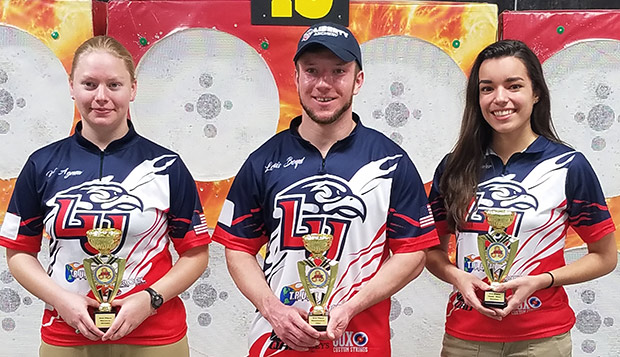 Louis Boyd, a junior transfer, will compete as the third-seeded archer in the men's bowhunter division, after playing a part in the Flames' 3D Outdoor Championships men's bowhunting team title this past fall.

"The men's bowhunter division is the most competitive, sought-out title," Liberty Head Coach Ian Rigney said, noting there were close to 70 archers entered in the regional bowhunting competition. "Finishing in the top eight is definitely something he can be proud of."

Lady Flames freshman Hannah Suber and sophomore Katherine Agnew are among the finalists in the women's Olympic recurve division as the fourth and eighth seeds, respectively.

"Hannah is in a very good spot to make a move," Rigney said. "She has been practicing a lot and was used to traveling to national events in high school, shooting the same bow. For Katherine, this will be a new experience for her, but she is excited and we are working with her to make sure she is prepared."

At last year's event, held for the first time at one location, Susanna Martin and Evan Blanthorn combined for a runner-up finish in mixed barebow and Meredith Dissinger placed second out of eight competitors in the women's recurve division.

"Indoor is not our strength, but it is becoming our strength," Rigney said, noting that the Flames and Lady Flames have experienced more national success in the 3D outdoor sport, which is more similar to hunting. "We've won one national title and finished in the top three a few times at indoor nationals, so we are making ourselves known in the indoor side of the sport."

Rigney and his three archers will fly out on Thursday morning for the three-day competition. The eight archers in each division will shoot 30 arrows on Friday evening with their total score added onto their final regionals scores. That will determine the seeding for Saturday evening's single-elimination quarterfinal, semifinal, and championship shootoffs. Each pairing will shoot four rounds of three arrows with the highest-scoring competitor advancing to the next round. The semifinals and finals will be streamed live on the World Archery YouTube channel.

"It will be similar to regionals as far as the elimination rounds go, but a lot more prestigious for shootoffs for the semifinal and gold-medal matches, which will have at least 1,000 people watching on location," Rigney said. "There will be a lot of tension and a lot of stress, but we perform well under stress so I'm not worried about it."