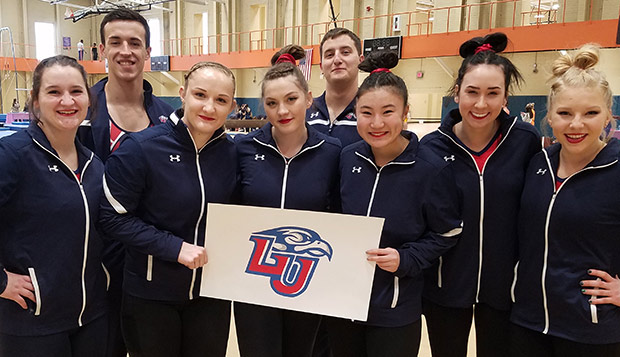 Liberty University's men's and women's gymnastics team opened its spring schedule with an eight-team event at Clemson University on Saturday, where the Lady Flames swept all events. The Flames and Lady Flames sent a total of eight gymnasts to compete against the host Tigers as well as others from Emory, Florida, Kent State, North Carolina, Tennessee, and Virginia Tech.

"We had a great first competition for our women's and men's teams," Liberty Head Coach Tim Kappel said, noting that though the two Liberty men had "a solid day," the Flames did not send enough men's competitors for them to place as a team.

In the women's competition, Lady Flames junior Julie Bouton finished first in the All Around after winning the vault, balance beam, and floor exercise and placing second on the bars.

For Liberty's men, senior Cameron Streeter finished third on the vault and graduate Austin Minuto also competed but did not place in the top three in any of his events.

The Flames and Lady Flames will compete again at JMU on Saturday.