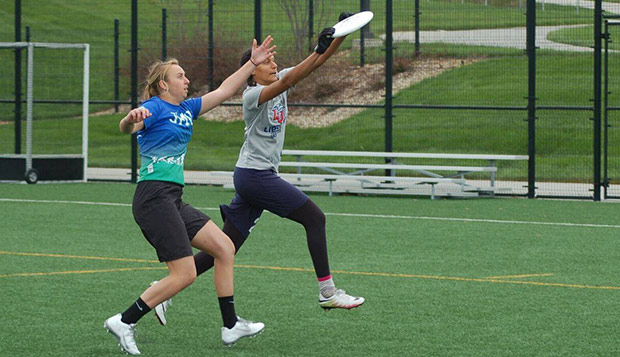 Junior Victoria Dissmore, shown going up for a catch against JMU, paced the Lady Flames with eight scores in seven games over the weekend.

After winning two of its first three games on Saturday, Liberty University's women's Ultimate team lost its final four matches to place eighth at its first tournament of the spring semester, the 10-team Winta Binta Vinta Fest, hosted by the University of Virginia.

The Lady Flames opened pool play with a 9-8 victory over William & Mary, a team it eventually lost to in the consolation semifinals, 12-5, before falling to Georgetown, 9-8, in the seventh-place match.

"It was very beneficial for us, in spite of the scores," Liberty Head Coach Jonathan Mast said. "The girls gained a lot of valuable experience and have enormous potential. I'm very excited to see what this season holds."

Lady Flames junior Victoria Dissmore led the team with eight goals scored, but scoring was evenly distributed throughout the team.

"Jennifer Vachon is back on the team after a year-long break and made an immediate impact with a team-high seven assists and four goals," Mast said.

Third-seeded UNC Wilmington upset No. 1 UVa, 14-6, in the semifinal round before defeating fifth-seeded Duke, 12-4, in the final.

Liberty will next travel to compete in the Feb. 24-25 Commonwealth Cup at the Smith Mountain Sports Complex in Martinsville, Va.