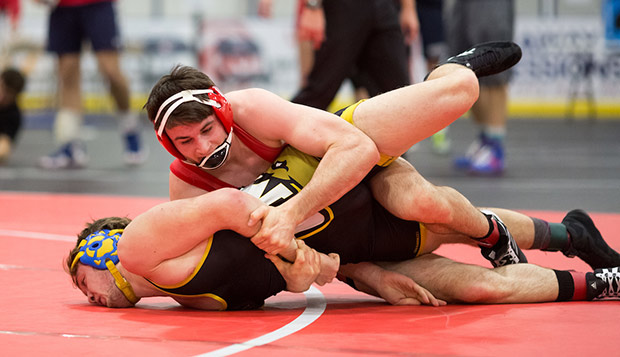 "Admittedly, being down 3-15 was an obstacle that only by the grace of God we could overcome," Castro said. "I turned around and lo and behold I see my boss, (Senior Vice President of Auxiliary Services) Lee Beaumont, and he asked the question, ‘What do you think? Can this be done?' He kind of inspired us to turn it around and make it happen."

The Flames won the final six bouts to turn the tables on the Lions and emerge as 30-15 champions, becoming the first team in history to claim three NCWA National Duals titles in the tournament, held for the second straight year in the LaHaye Ice Center.

As the second seed and reining runner-up, Liberty had advance past three of the top four-seeded teams in the tournament in Saturday's championship rounds. The Flames, who finished 5-0 over the two-day tournament, opened with a 39-15 rout of top-seeded Central Florida in the quarterfinals before dominating third-seeded Grand Valley State, 44-6, to set up a finals rematch with fourth-seeded Emmanuel.

"Joe brings a lot of experience and a lot of confidence with him," Castro said. "He's a game-changer for us as a program. We had to get a win from him and he garnered momentum after his match."

Sophomore 174-pounder Sam Karel pulled the Flames back within 15-13 by turning Calvin Nimely to his back on the edge of the mat, where he finished the fall at the 1:29 mark with both wrestlers nearly completely out of bounds. Then, junior co-captain Josh McIlhenny escaped in the final minute of the third period to tie his match with Melvin Mimely at 3-3 before fighting off a single-leg takedown attempt with both wrestlers on their feet for a sudden-death takedown of his own on the edge of the mat, lifting Liberty to a 16-15 advantage that it would not relinquish.

The match turnaround was especially satisfying for Liberty after losing to Emmanuel by a 33-13 count in last year's final.

"We came together as a team, worked hard and together as one, esprit de corps," Castro said.

"We are a far different team than we were last year," added McIlhenny. "From 125 to heavyweight, we're strong and, if we get going, I feel like we're unstoppable once we're rolling."

McIlhenny clinched the win over Grand Valley State with a come-from-behind 8-5 decision over Brenden DeVries earlier in the day.

A foursome of freshmen got the Flames off to solid starts in most of their matches. Keegan Smith filled a void at 125 pounds, a weight class Liberty forfeited in every match last season, and a trio of Lynchburg-area locals — Blake Justis at 133, Reid Stewart at 141, and Chad Cantrell at 141 — gave Liberty the early momentum it needed against Central Florida in the first match of the day.

"As a freshman, Reid Stewart comes in and beats the returning national champion from UCF," McIlhenny said. "That just takes the wind out of their whole team's sails. That was huge and it really turned the tide for us. It was awesome."

Cantrell, who followed Stewart's upset win with a technical fall at 149 pounds, has returned to form at the same time as Stewart after recovering from similar injuries.

"We both had labrum surgeries coming into the season and we both actually just started wrestling again in December," Cantrell said. "We got back at about the same time and he's one of my go-to training partners in the room."

Stewart believes the Flames, who will take 16 points into the March 8-10 NCWA Grand Nationals in Allen Texas, for winning the 16-team National Duals, are the favorites to sweep the titles, as they did in 2015.