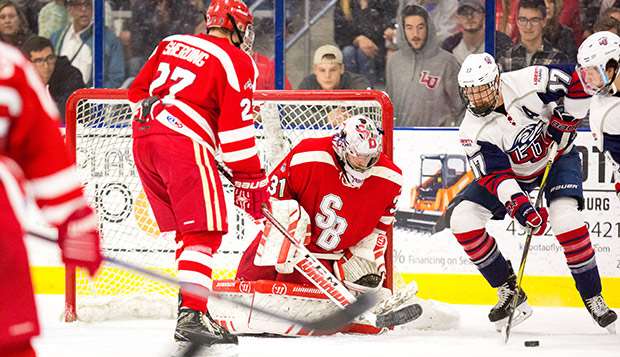 Senior forward Grant Garvin set up both of Liberty's goals on Sunday to bring his season total to 16 goals and 32 assists for 48 points. (Photo by Andrew Snyder)

Playing in his second game since transferring from NCAA Division III Elmira (N.Y.) to start the spring semester, Liberty University ACHA Division I men's hockey freshman center Devin Pierce made an immediate impact for the Flames, netting the game-winning goal late in the third period of a 2-1 triumph over 11th-ranked ESCHL rival Stony Brook, Sunday afternoon at The Rinx.

"Devin is a nice addition to our team, both on and off the ice," Liberty Head Coach Kirk Handy said, noting Pierce shared faceoff duties with freshman forward Ryan Cox and sophomore forwards Quinn Ryan and Tim Bierema. "We were excellent in the faceoff circle tonight and this whole weekend. He was able to win a lot of draws and be real effective for us. All of those guys are solid faceoff guys and that's a key part of our game. It's always good to start with the puck."

The Flames (18-6, 13-2-1 ESCHL, No. 14 in ACHA DI) needed to maintain an edge in time of possession with the puck because they were playing with a depleted defensive corps. After starting the series without Garrett Nelson and Josh Bergen, fellow sophomore defensemen Matt Cruickshank and Jacob Fricks went down with injuries in Saturday's opener.

Handy called on senior forward Colt Steele to play back on defense and Bergen returned from a concussion to provide reinforcements in front of junior goalie Cole Burack, who made 32 saves to allow Liberty to complete the sweep.

"That shows the resilience of our team and that's the big thing," Handy said. "I was really proud of our guys and the effort they put in this weekend. Stony Brook is a good team and we battled through a bunch of injuries. Different guys stepped up as needed and we stuck with it and had excellent goaltending. Cole Burack played fantastic."

Liberty seized a 1-0 lead at the 17:49 mark of the second period when leading scorer Grant Garvin sent a pass from near the right corner back to junior defenseman Zane Schartz, who one-timed a shot from the high slot past Stony Brook goalie Payne Yoder inside the left post for his 15th goal of the season.

After Stony Brook (15-5-1, 10-3 ESCHL) created several quality chances on its first power-play opportunity, including a few shots by defenseman Frank Coscia saved by Flames junior goalie Cole Burack, the Seawolves capitalized on a five-on-three with 4:58 to go in the second stanza. When sophomore forward and head captain Josh Hamilton missed the puck on a diving poke check clear attempt in the high slot, Stony Brook defenseman Francesco Sherding had time and space to set up for a shot that beat Burack to the top right corner, evening the score at 1-1.

Unlike Saturday's opener, when the Flames were stoked coming out of the second intermission and stormed from two goals down to upend the Seawolves, 3-2, neither team appeared to have an emotional edge in the third period of Sunday's rematch.

Garvin hit a post with an early shot and Stony Brook forward narrowly missed a wrist shot from the left circle wide left before Hamilton had his shot from the point glove saved by Yoder. Play went back and forth for much of the period before Hamilton was tripped from behind as he skated between two Seawolves, putting Liberty on a power play.

With the Flames on a five-on-four advantage, they started a fast break and Pierce worked a give-and-go with Garvin up the right wing before launching a shot from in the right circle that sneaked past Yoder stickside into the left side of the net.

"Devin was playing in place of Quinn Ryan on the power play unit after Quinn got injured and he stepped in there and made a nice shot," Handy said. "It was his first goal as a Flame and it was the game-winner. He was our player of the game … we're all happy for him."

Both teams fired 33 shots on goal during the game.

Liberty returns to the LaHaye Ice Center for a series against ESCHL rival Rutgers on Friday and Saturday at 7 p.m.