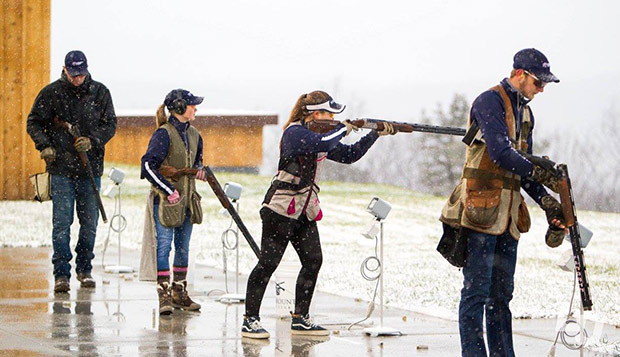 With Phase One of construction on the multi-million-dollar Liberty Mountain Gun Club complete, members of Liberty University's shooting sports teams and Executive Director and Head Coach Dave Hartman held a meet-and-greet event on Dec. 8 for the Liberty community to interact with the team and get an up-close look at the new facility.

Snow blanketed the scenic overlook from the main shotgun range — which includes a five-stand, a super sporting clay setup, and a bunker equipped with 15 clay trap machines — and the Liberty Mountain Snowflex Centre and Center for Medical and Health Sciences were barely visible in the distance.

"We're very excited and we have a great plan for the future," Butler said. "What's unique about this facility is it's the only range on any college campus that has venues for all Olympic shooting sports. The rest of the world is moving away from the Second Amendment and the shooting sports. Liberty University, thanks to the bold leadership of President (Jerry) Falwell and Vice President (Trey) Falwell, is running to it. We are engaging our students, giving them safe and convenient opportunities to compete, and to learn the right way to handle a firearm."

More than 3,000 Liberty students have taken free firearm safety courses offered through LUPD, a prerequisite to use the new range. Members of the law enforcement community are now able to train at the state-of-the-art facility.

Hartman said the new facility provides an outlet for enthusiasts of one of the fastest-growing sports in America. He noted Liberty is only the second university in the country equipped with an on-campus shooting range.

"There are hundreds of thousands of youth in our country that love the shooting sports," Hartman said. "Where do they go when they get done shooting in high school? We have a rare opportunity here. It is truly my hope and dream that we use this range as a platform to plant seeds all over the country in shooting sports and Christianity."

Flames sophomore Landon Dalton grew up hunting and fishing around Lynchburg, Va., and made the competitive travel roster for Liberty's first-year team.

"I got introduced to a whole new world up here in competitive shooting and it's been awesome," Dalton said. "Coach Hartman has really helped us out a lot. He's a very godly man and a great coach and he's helped us grow as teammates and as shooters, but more importantly as better Christians."

Sarah Crabtree, a junior pre-law student from Harrisburg, Pa., thanked Morris and representatives of sponsors LaPorte and White Flyer, clay target manufacturers, for allowing her the chance to participate in a sport she is very passionate about.

Liberty graduates Hanri Kaya ('05, B.S. in Nursing) from South Africa and Kutlay "Peter" Kaya ('03, M.A. in Religion) from Turkey, are CEO and Chairman of the Board, respectively, at Zenith Firearms in Afton, Va. The company donated 12 rifles to the Liberty Mountain Gun Club in September.

"We have so many college students here who wanted to engage in the program that weren't able to bring their own firearms," Butler said. "We'll be forever thankful for (Zenith) stepping up and helping us to get this program started."

Nick Berry, ambassador for the French company Laporte, the world leader in traps and clay targets that supplies equipment for the Olympics and the U.S. National Championships, said Liberty's shooting complex will be capable of hosting World class events.

"We're helping to build one of the top shooting facilities (in the U.S.)," Berry said. "We're very lucky to work with people with a vision. It will attract students to Liberty that might not have otherwise come."

Berry installed the 10 machines for the five-stand and super sporting station, the trap and skeet fields as well as 15 machines for the bunker, with another 60 to be in place by the time the new sporting clays courses are finished.

"That's definitely a lot of machines, but it's how you make champions," he said. 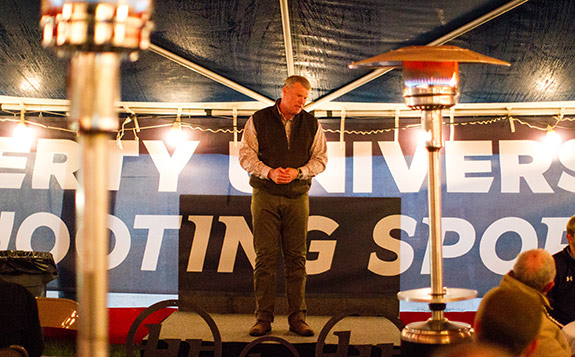