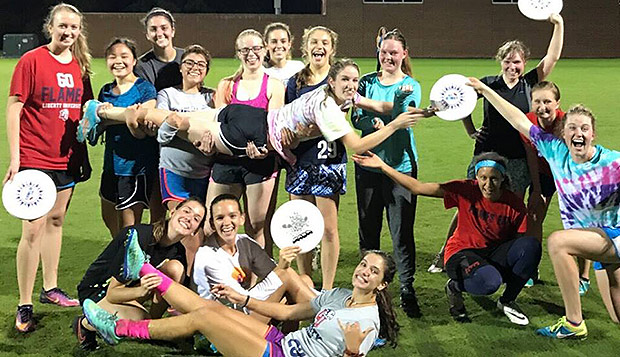 Liberty's women's Ultimate team had a large turnout for tryouts in September, with the enthusiasm translating into a successful start in fall semester tournament play.

It was a semester of growth and positive learning experience for Liberty University's women's Ultimate team, which held its own in the Fall 2017 tournament competition with only six returning players and an influx of freshmen and other newcomers.

"These girls are amazing," said Hilary Kline, a senior psychology major from Philadelphia who is planning to travel to Thailand over the Christmas break to introduce the sport of Ultimate through youth clinics there. "We connected quickly and deeply and that's definitely going to transpire into our playing for the spring season. I think we have a bright future for the spring."

"We have a lot of new girls who have learned a lot really quickly," added Anna Marie Stow, a sophomore from Chile who has played the sport for four years. "I've been really proud to have recruited some of these girls. They've done such a fantastic job."

The Lady Flames will look to return to the Atlantic Region tournament, after finishing fourth in last season's event, narrowly missing their first-ever bid to USA Ultimate Collegiate Nationals.