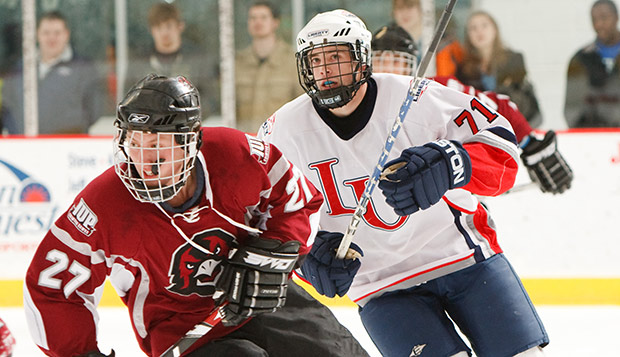 Former Liberty University ACHA Division I men's hockey forward Kyle Dodgson ('10), who will join teammate and 2015 inductee Dave Semenyna in the Club Sports Hall of Fame on Friday night, helped the Flames usher in a new era as the program transitioned from the Division II ranks in 2006.

"Kyle was an elite player for us," said Flames Head Coach Kirk Handy, who grew up in Dodgson's hometown of Huntsville, Ontario. "I saw his career over a number of years with the Huntsville (Junior) Otters and followed his progression. He was part of a core group of players along with Dave (Semenyna) and (forward and three-year captain) Zac Bauman that helped take our team to the next level."

Dodgson netted 100 goals and distributed 149 assists to rank second on Liberty's all-time scoring list with 249 points, behind only defenseman Semenyna (102G, 160A, 262 points). Both were finalists for ACHA Division I player of the year honors in their senior seasons in 2009-10, when Dodgson set a program record and led all ACHA DI players with 77 points.

Jeff Lowes, who played with Handy at Liberty in the late 1990s and served as his assistant from 2005-12, will be Dodgson's presenter at the 6 p.m. ceremony in the Montview Student Union Alumni Ballroom. He had a hand in developing the talents of both Dodgson and Semenyna as an assistant coach, working with the Flames' forwards their first two seasons before directing the D corps their last two years.

"Kyle's success and Dave's success really brought some recognition to the quality of players we were recruiting," said Lowes, who gave up coaching to become an associate professor in Liberty's Department of Health Professions. "They were two driving, prominent players. Kyle led from the front and Dave from the back, and both played in all roles — on power play and penalty kill. (Kyle) could really do it all. We had decent talent, but he always made the players around him better."

Dodgson, who earned first-team All-American and All-Rookie Team honors as a freshman, credited his teammates for accumulating a 109-38 record and qualifying for the ACHA Division I National Championships in all four seasons he played with the Flames — highlighted by their first Final Four finish at the DI level his sophomore year.

"I always tried to lead by example and through my work ethic and attitude," he said. "I was fortunate to play with a lot of different highly skilled players and my success was because of them. I was also privileged to have a good coaching crew my whole career. They were always very understanding and did everything they could to help us become the best that we could be."

While Semenyna was the flashier and more outspoken player, Dodgson stayed out of the limelight on and off the ice.

"He was a man of little words, but when the game started he was all business, which I really appreciated," Lowes said. "He was mature past his years when he came in. He was a very humble, quiet kind of guy, but a very hard-worker. His biggest thing was his intensity level. He was a very physical, rugged player. He played hard and he didn't miss a lot of games."

In fact, Dodgson ranks fifth all time in games played for the Flames with 141. He displayed durability and endurance, built up from playing both hockey and lacrosse growing up in Canada.

"In his off-ice conditioning, that guy could just run for miles and miles," Lowes said.

"He was a tireless worker and had a lot of energy," Handy added. "You could play him as much as you wanted and he never seemed to wear out. He came to play every night and had a real positive spirit about him."

After graduating with a degree in Kinesiology, Dodgson returned to his homeland and became a physical education teacher at a Saskatchewan high school for a few years, while playing in a men's senior league and giving powerskating lessons on the side. He eventually married a police officer and, after patrolling the ice as an official in area hockey leagues, became one himself.

Kyle and Lindsey Dodgson currently work for the same Ottawa Police Service, responding to a variety of calls.

"Every day is different and the chance to help people in their worst situations," Dodgson said. "I enjoy working in a team environment, toward a common goal. It's kind of rewarding at the end of the day."