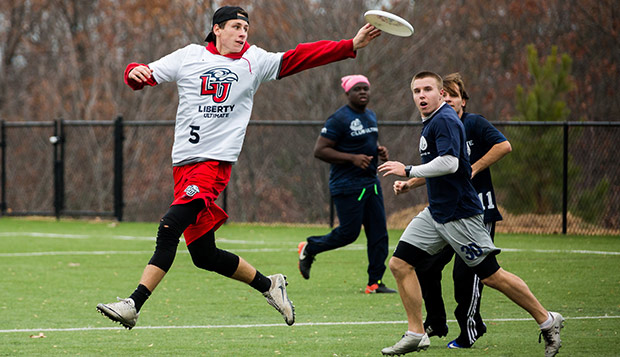 Liberty University's men's Ultimate team and the Old Man Ultimate team made up of LU alumni both went 5-2 and finished third and runner-up, respectively, to James Madison University at this past weekend's Blue Ridge Open, the final tournament of the Fall semester hosted by the Flames at the Liberty Mountain Intramural Complex.

"That was the first time we've played JMU in three years and we expected that to be a tough game," Liberty Head Coach Brendan Phillips said of the Dukes, who finished last season ranked 35th in the nation.

JMU defeated the Flames 15-5 in Sunday's semifinals before knocking off Old Man Ultimate for the second time in the tournament, 11-5, in the championship match. Liberty won its third-place final over Big Lick Ultimate Discs (BLUD), a club team from Roanoke, by forfeit after the Flames beat BLUD 12-9 in Saturday's pool play.

Liberty posted 13-9 and 11-6 wins over High Point and Old Dominion before the Flames lost Saturday's final pool play match to Ohio, 13-9, after allowing the Bobcats to break them three points in a row to pull away in the second half.

The Flames rallied for a 12-11 triumph over Elon in the quarterfinals, scoring the game-winning point in sudden-death.

"We were down a point and the time cap had gone off so we had to score and we did to tie it up," Phillips said. "In sudden death, they received first so we had to get the disc back on defense and score."

Liberty's defense came up with a layout knockdown to force the turnover before working the disc downfield, with freshman Ben Reutener assisting sophomore Zach Milligan on the game-winning score.

"Luke Byron and Ben Reutener were our primary handlers on offense and Sam Peterson did a great job all weekend of setting up our vertical stack," Phillips said. "He kept everybody organized and did a great job of that, like a quarterback on the field."

Sophomore Caleb Weldy made a couple critical knock-downs against Elon, one that saved a score in the end zone.

"They're all wonderful cutters and were able to get open deep," Phillips said. "As a whole, our offense played really well and, other than the JMU game, only gave up the disc about six times."

The Flames have two months to prepare for their next tournament, the Feb. 3-4 Mid-Atlantic Warmup at William & Mary before traveling to UNC Wilmington for the Feb. 17-18 Eastern Qualifiers. Liberty will embark on the longest road trip in team history to participate in the 25th-annual Huck Finn, the premier college open tournament in the Midwest hosted by Washington University in St. Louis over Easter Weekend on March 31 and April 1. That will be the Flames' last tournament until the April 14-15 Virginia Conference Championships, which Phillips has put in a bid to host.