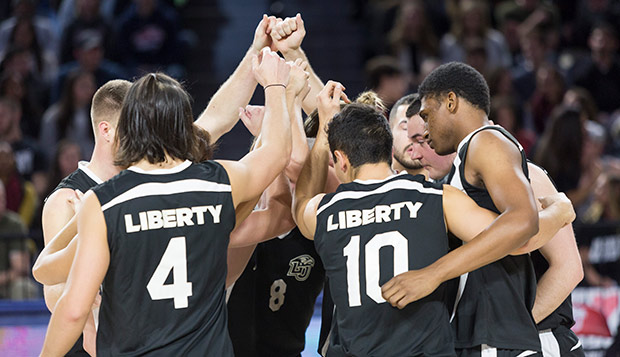 Liberty's DI team, which opened the day with a 25-17, 25-15 sweep of Gary Martin's club team, then dominated Cairn (Pa.) University's NCAA Division III program, 25-12, 25-14. Liberty split its match against tournament host LBC, losing the first game, 25-15, before rebounding to win the second, 25-20, and clinching first place in its pool by beating Alvernia's A team.

The tournament was the last of the Fall semester for the Flames, who will find out their preseason National Collegiate Volleyball Federation (NCVF) rankings in the next month before hosting their annual "Midnight Mayhem" matchup in the Vines Center. That will launch Liberty's Spring semester schedule as the Flames prepare to make a run at the East Coast Volleyball Conference (ECVC) regular-season and tournament titles and qualifying for the NCVF Collegiate Club Volleyball Championships, set for April 11-14 in St. Louis.