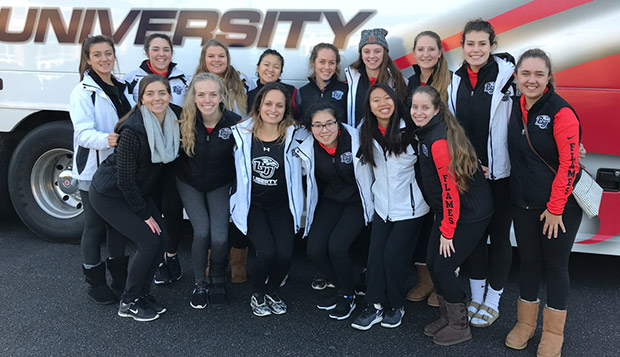 Liberty traveled to New York City over the weekend to compete in its first Eastern Sectional event of the season.

A dozen members of Liberty University's figure skating team combined for 54.5 points over the weekend to place sixth out of 24 teams at the first Eastern Sectional competition of the season, hosted by New York University.

Due to a few injuries, the Lady Flames were only able to enter 23 of a maximum 30 events, putting them at a disadvantage against the top five teams in the field.

Freshman Novice-level skater Angela Bosher finished in first place individually in both her long and short programs and freshman Juvenile skater Haley Gram placed second in her division with what she considered the best skating performance of her career.

"She displayed such grace and finesse as she took to the ice," Liberty Head Coach Dawn Harter said.

Junior Katherine Thacker turned in her best collegiate ice dance performance of her career with a first-place finish in her Gold Dance routine on Saturday followed by her third-place showing in International Dance on Sunday.

"Those were two high-level dances that she made look effortless," Harter said.

Sophomores Jill Holste and Kimberly Joe, who are both dealing with injuries, placed third in their Preliminary dances.

"This was Jill's first time ice dancing and she did a fabulous job," Harter said. "The girls are currently not able to do jumps and spins and so they have taken up ice dance. They will be learning two more dances before the Christmas break so they can compete in the Spring."

Preliminary skaters Mya Pritts, a freshman, and Octavia Klausman, a junior, placed fifth in their respective classes in their first performances representing Liberty.

Sophomore Jordan Robinson, skating in her last competition for the Lady Flames before focusing on helping to lead Young Life ministries on campus, placed fifth in Sunday's Junior long program to earn one point for the team after taking sixth in Saturday's Novice short program.

"The competitive bar was definitely raised and we're challenged to take on the next two competitions in the spring with a fiery approach," Harter said of the Feb. 3-4 Eastern Sectional event at MIT and the March 17-18 competition at Carnegie Mellon.

The Lady Flames will hope to enter their maximum number of events in those two competitions to try to move up into the top four in the final team standings and clinch a bid to the April 13-15 U.S. Figure Skating Intercollegiate National Championships in Denver.