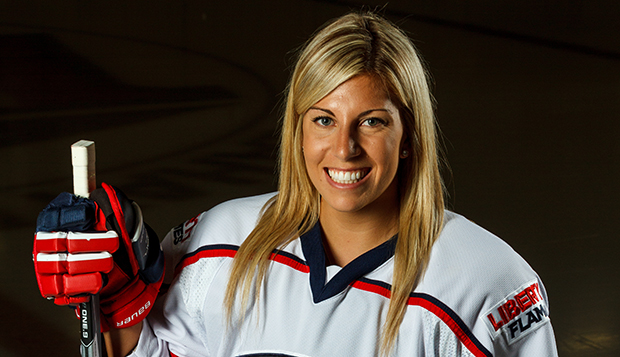 Current and former players and coaches of Liberty University's ACHA Division I women's hockey team will flock to Aurora, Ontario, en masse this Friday afternoon for a celebration of the life of former All-American forward Sarah Stevenson, who died at the age of 24 early last Tuesday morning at Southlake Regional Health Centre after being admitted late Monday night with a case of Neisseria Meningitidis.

Stevenson ('15), who graduated with a degree in criminal justice and a minor in psychology, helped lead the Lady Flames to their first ACHA Division I National Championship in 2015 before becoming the first ACHA player to be drafted by the Canadian Women's Hockey League. She was selected in the fourth round (17th overall) in the expansion draft that year and became the first Liberty women's graduate to play professional hockey, spending the 2015-16 season with the Toronto Furies.

Greenwood and Tipping had the privilege of watching Stevenson play for Toronto when the Furies visited the Brampton Thunder in Greenwood's hometown.

"It was really nice to be able to see her and go support her and be like, ‘Hey, I played with her,'" Greenwood said. "She was playing with the top players in Canada, so it was pretty cool."

As one of seven seniors on Liberty's national championship team, Stevenson played some of her best hockey at her final ACHA DI tournament, scoring four goals and distributing four assists in five games. She was selected to the ACHA DI All-Tournament Team along with Lischynski, Fischer, and Kucharczyk.

Stevenson led Liberty in assists that season and ranked second on the team in scoring. For her career, she is the Lady Flames' all-time assist leader with 109 and added 55 goals to rank third in scoring with 164 points in 134 games — behind only Jickling and Kristin Frescura — and third with four shorthanded goals.

"She was the epitome of a hard-working girl and a great teammate," said Forth, who coached Stevenson during her freshman through junior seasons before returning to the bench last fall. "She always wanted to get better and to be her best and her hard work and love for the game rubbed off on her teammates. She was a big part of the success that the team had those four years and played a major role in winning the championship. She increased the depth and the quality of the program immensely with her work ethic, her natural ability, and her selflessness on and off the ice."

At last weekend's University of Massachusetts Showcase, players, coaches and fans observed a moment of silence in memory of Stevenson before Saturday's game against the host Minutewomen. In her honor, Lady Flames players banded together and decorated their sticks and sleeves with purple tape, Stevenson's favorite color, also taping her No. 11 on the back of their helmets.

All five Liberty hockey teams will wear stickers honoring Stevenson on the back of their helmets for the remainder of the season.

"We're just going to try to do whatever we can to keep her in our memory throughout the rest of the season," Gilmour said. "She was a big part in our career, so just holding her through our last season together is definitely going to be helpful for us." 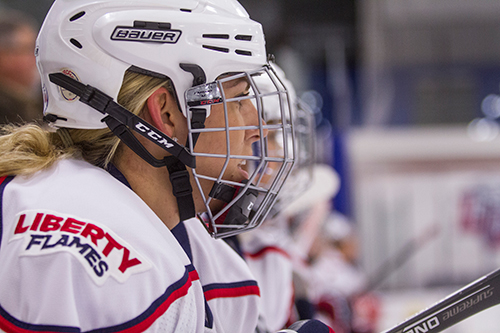 All three Liberty seniors played on Stevenson's line from time to time as freshmen.

"She really took me under her wing that first year," Tipping said. "We kind of made an immediate connection and I was her rookie and she was my senior."

"She was constantly pushing me to do better every practice, every game, on and off the ice, and she was so encouraging," Greenwood added. "She held me accountable when I made mistakes and she was always trying to make me a better hockey player. I really looked up to her and respected her and I'm really thankful for her friendship."

Stevenson wasn't very vocal, but led by her consistent example of excellence.

"She didn't talk a lot in the dressing room," Gilmour said. "She was very quiet, but she had this presence of confidence. Everyone kind of looked up to her and the standard that she held us all to without even having to say anything. She just pushed us all with her attitude. We all wanted to work as hard as her."

"She was the type of player that whenever she spoke, everybody listened," Greenwood added. "She was probably one of the most respected players on our team."

The Lady Flames will pay Stevenson their final respects on Friday, when her family will receive guests from 2-4 p.m., followed by a memorial service from 4-5 p.m.