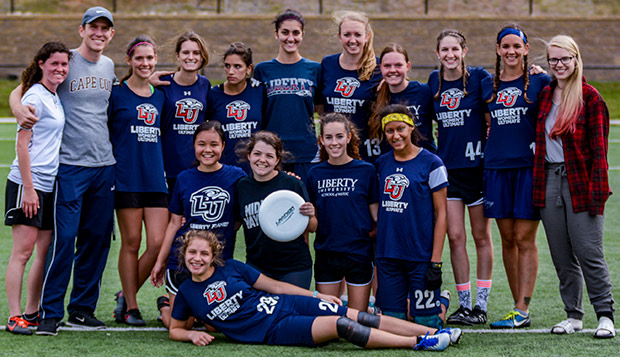 Liberty University women's Ultimate team had a rare opportunity to play against the starting line from last season's team — which finished second in the Virginia sectional tournament and fifth in the Mid-Atlantic region — at Saturday's LUWU Open, played on the Liberty Mountain Intramural Complex fields.

Though they lost the match by a 9-5 final in the four-team, round-robin tournament, the Lady Flames — who feature only six returning players on their 17-player roster — improved their games in the constructive atmosphere.

"A lot of the alumni were very encouraging, and wanted to see the new girls do well," Liberty Women's Ultimate Head Coach Jonathan Mast said. "They were a very strong line, a line that almost led Liberty to (USA Ultimate) nationals last year. It was a good event, regardless of the score, and it will benefit us as a team."

The Lady Flames also lost to the Townies — a team they had met in the final of their season-opening tournament the weekend before at Richmond — by a 7-5 score and defeated a team from Radford, 11-6.

"We mixed up different lines, trying to figure out what would work and what wouldn't work," Mast said. "It was a valuable experience for the freshmen, who got a lot of playing time."

Junior cutter Victoria Dissmore was the Lady Flames' primary downfield target and scored the most points.

Defensively, Stow had most defensive knockdowns, with at least four in the alumni game alone.

In the previous weekend's tournament at Richmond, Liberty beat Virginia's B team, 14-4, to finish 2-1 in pool play before defeating the host Spiders in the semifinals, 12-5, and losing to the Townies in the final, 15-7.

"Our team had a great learning and bonding experience," Mast said. "There has already been tremendous progress and growth as players and a team. Both returners and rookies are stepping up to learn new roles in a big way."

On Nov. 11, the Lady Flames will participate in the Hill City Hatter, a 10-team co-ed pick-up tournament hosted by Liberty's men's team.