Flames travel to Rhode Island for ESCHL series against Rams 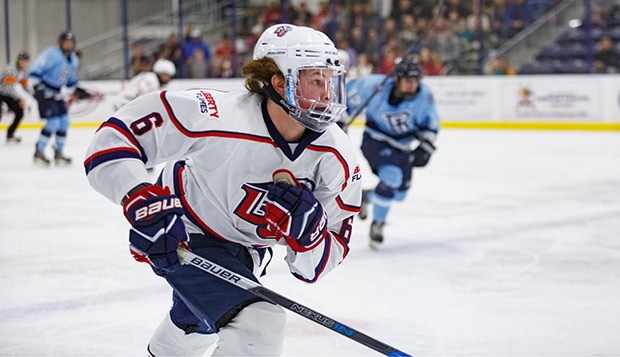 Sophomore defenseman Jacob Fricks battles along the boards in the Flames' last series against Rhode Island in the LaHaye Ice Center. (Photo by Caroline Cummings)

Although Liberty University's ACHA Division I men's hockey team won all five meetings with Rhode Island in the Flames' first season in the Eastern States Collegiate Hockey League (ESCHL) last year, they were all very competitive contests, including a 3-1 triumph in the semifinal round of the ESCHL Tournament, hosted by the Rams in Kingston, R.I.

"It was a back and forth game and it was a physical game," Head Coach Kirk Handy said after Liberty ousted Rhode Island on its home ice, sealed by an empty-netter in the closing minute. "All the games we played with them were basically one-goal games."

As the Flames traveled to Rhode Island on Thursday afternoon for this weekend's ESCHL showdown, he maintained that the Rams are a resilient opponent.

"We know that we are going to have to work hard up here and be at our best," Handy said. "Rhode Island is always a good team and we're looking forward to the opportunity. We're not concerned about what happened last weekend, or last year. We're looking to continue our growth as a team, to get better and continue our progression as a team."

He was satisfied with the way the Flames responded in Saturday's rematch with Syracuse after wasting a 3-0 lead in Friday's opener by allowing five unanswered goals by the Orange, the first four on power plays.

"We learned from what went on last weekend and have become better for it," Handy said. "There were a lot of things we can clean up in our own game. Our special teams weren't where we needed them to be. We were consistent for portions of both games, so we want to make sure we are consistent and execute at a high level for the complete 60 minutes of both games. We will look to take a big step forward with that this weekend."

The Flames are without forward Josh Hamilton, their head captain who was injured in Saturday's second-game win over Syracuse. Liberty's defense is led by Schartz and sophomores Basil Reynolds, Jacob Fricks, Chaydan Lauber, Matt Cruickshank, and Josh Berger.

Junior goalie Josh Halpenny will start Friday night's opener after recording the second-game win against Syracuse on Saturday, 4-2, improving his record to 3-1 and nearly maintaining his 1.75 goals-against average while raising his save percentage to 92.6. Junior transfer Cole Burack still has slightly better numbers, going 3-1 with a 1.50 GAA and 93.6 SP. Both have played 240 minutes between the pipes and recorded one shutout.

"Both Josh and Cole work hard and have really been a big part of our team, so I expect them to be ready to go every night," Handy said.

Rhode Island scouting report: The Rams, who won their only ACHA DI national championship in 2006, the season before Liberty elevated its program to the Division I level, started the season ranked No. 23. After being swept by Stony Brook last weekend — by 6-4 and 4-2 scores at The Rinx on Long Island, N.Y. — Rhode Island slipped from the No. 21 spot to No. 25.

Offensively, Rhode Island's catalysts have been forwards Jonathan Alsfeld (8G, 2A), who has capitalized on four power-play goals, Luke Vendetto (2G, 6A), and Nathaniel Gray (4G, 2A).

All-Time Series: Liberty leads 7-0, sweepting all five meetings with Rhode Island last season, and winning both games against the defending ACHA DI national champion in their first season competing at the Division I level in 2006-07.

Coaches: Handy is in his 18th season as the Flames' head coach and has compiled an overall record of 381-168-25. Rhode Island is coached by Joe Augustine, the only coach in the ESCHL with a longer tenure than Handy. He has amassed a 596-283-62 record in 29 seasons at the helm.