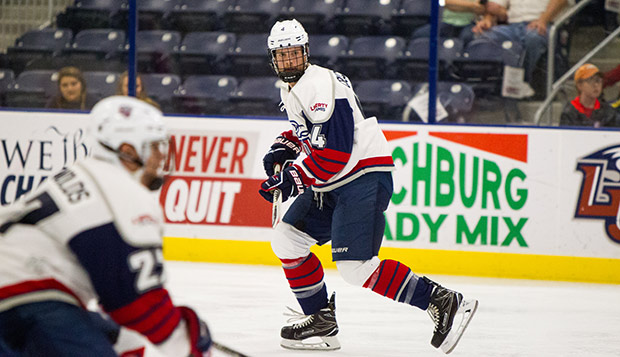 A day after letting a 3-0 lead slip away in a 5-3 defeat, Liberty University's ACHA Division I men's hockey team opened a 4-0 advantage late in the first period of Saturday afternoon's rematch at the LaHaye Ice Center and squashed Syracuse's comeback bid for a 4-2 victory over its new ESCHL rival.

"I think we learned our lesson from last night," Flames Head Coach Kirk Handy said. "Yesterday, we didn't have a pushback and today we had a pushback, which was good. Our penalty kill was the difference. They played well today."

Liberty only outshot Syracuse 27-26 for the contest and was whistled for nine penalties to just six for the Orange, but allowed only one power-play goal compared with four on Friday night.

"We didn't want to fall into the same scenario of what happened with the penalties late in the game," junior defenseman Zane Schartz said. "So we tried to be more disciplined and we had a good rebound from yesterday and were able to come out with the win."

The Flames (6-2, 5-1 ESCHL) netted all four of their goals in the first period. They took advantage of a man-down situation for the Orange (5-2, 2-2) after defenseman Stephen Bressi took Liberty defenseman Jacob Fricks' slapshot from the high point to the side of his knee. As Bressi limped toward his bench, the Flames capitalized quickly off the fast break with Cole Gammer receiving an assist from fellow freshman forward Jordan Bochinski and tucking a backhand on a one-on-one with Orange goalie Michael Cuozzo inside the left post for a 1-0 lead with 17:20 left in the period.

Less than five minutes later, sophomore defenseman Matt Cruickshank skated the puck beyond the left endline and flipped it back to sophomore forward Cody Clarke in the left crease for a one-time finish, pushing Liberty's lead to 2-0.

"Gammer's was a big goal, right at the beginning of the game, which helped give us life," Handy said. "Cody Clarke and played well for us, so it was great to get other guys going for us."

Seconds after killing the Orange's first penalty with 8:14 left in the period, the Flames struck again when sophomore forward Quinn Ryan lifted a wrist shot from inside the left circle that popped out of the glove of Cuozzo and floated into the upper netting for a 3-0 lead.

Liberty padded its lead to 4-0 with 3:52 to go on a slapshot by Schartz off a slow pass across the ice from Ryan for the Flames' only power play goal of the weekend.

"It was a good pass from Quinn on the power play and that gave us momentum early," Schartz said.

Moments after the ensuing faceoff, Liberty sophomore head captain Josh Hamilton suffered a knee injury on a collision as he skated with the puck along the right endline.

"We had to face a lot of adversity with Josh Hamilton going down," Handy said. "He's going to be out for a while, and we're going to have to battle through it."

Syracuse got on the scoreboard by converting on a five-on-three power play, with forward Peter Owen Hayward lifting a wrist shot from deep in the left circle into the upper netting past Liberty goalie Josh Halpenny, cutting the deficit to 4-1 with 4.6 seconds remaining in the period.

The Orange closed the gap to 4-2 in the final 18.5 seconds of the second period when forward Joseph Pucciarelli poked a loose puck inside the left post after Halpenny had made the initial save of a breakaway opportunity by Hayward.

"It was very similar (to Friday night's comeback) and it did give them some life, but I liked our pushback today," Handy said. "Victor Blomberg stepped up. Tim Bierema had a big game for us. Josh Bergen, Colt Steele, and Matt Cruickshank played well. Josh Halpenny was solid in the pipes."

Liberty will take its second road trip of the season for ESCHL games at Rhode Island next Friday at 7 p.m. and Saturday at 4 p.m. Schartz said the Flames left plenty of room for improvement this weekend.

"Overall, we need to be better to win these games, and to be the team that we want to be, we need to show up for the whole game every game," Schartz said. "Rhode Island's a good team. It's always a good battle against them. Hopefully, we can go there and play 60 minutes in both games and come away with two wins. We're just going to use momentum that we built today and keep moving forward."