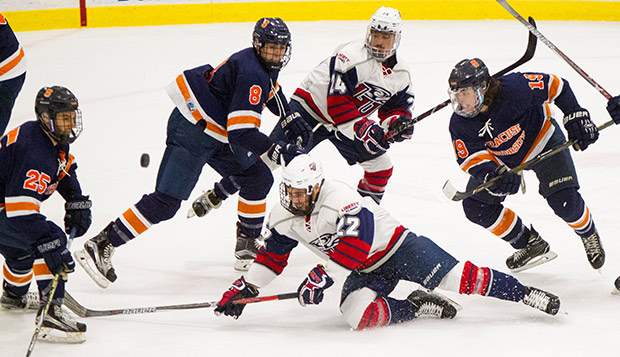 That stretch of near perfection came to an untimely end in the Flames' first game against the Orange since 2000. Syracuse netted four unanswered power-play goals — the first by forward Lucas Prestamo on a five-on-three with 1:44 left in the second period — to seize a 4-3 lead with 8:50 left in the third before capping the dramatic comeback with a shorthanded empty-netter a split second before the buzzer.

"We put our PK in a vulnerable spot and we can't have that," Liberty Head Coach Kirk Handy said. "That killed us. We didn't play our best tonight. I liked our game in the first and second period. I didn't like it in the third. We just have to be as a team more disciplined. We had our opportunities tonight (but) we let the game go in the third period. They just outplayed us. Hats off to Syracuse. That's a good team. They wanted it, and they deserved to win tonight."

Liberty (5-2, 4-1 ESCHL, ranked 13th in the ACHA Division I poll), which netted all three of its goals at even strength, started the scoring with 8:04 left in the first period when freshman forward Sam Carlson stuck in a short pass across the crease from sophomore defenseman Basil Reynolds while falling down in front.

Freshman forward Jordan Bochinski extended the lead to 2-0 by redirecting a shot launched from the left blue line by sophomore defenseman Jacob Fricks, set up by a backward pass from senior forward Grant Garvin. Moments later, junior defenseman Zane Schartz ignited the Flames' third goal with a beautiful long-range pass onto the tape of sophomore forward Brock Thompson's stick as he cut through the slot. Thompson beat Orange goalie Michael Cuozzo one-on-one with a backhander at the 16:06 mark for what seemed to be a commanding 3-0 lead.

But 24th-ranked Syracuse (5-1, 2-1) prompted Liberty to go to the penalty box one too many times for retaliation offenses, including a five-minute major assessed to sophomore forward Quinn Ryan in defense of fallen senior linemate Grant Garvin who was cross-checked from behind to his head. That put Liberty junior goalie Cole Burack's back against the wall in his own cage and the Orange picked the Flames' penalty kill apart.

Prestamo's score, on a wrist shot from deep in the right circle that whizzed past Burack through a screen top shelf, ended a 178-minute shutout stretch for Liberty's defense.

Orange forward Matthew Jacobs netted Syracuse's second and third scores, both with a five-on-four advantage. The first came just 15 seconds into the third-period — with just 16 seconds remaining on Liberty's five-minute major. He put away a misfired shot from the top of the left circle off the stick of Luke Caddo that the Flames' defense failed to clear in the left crease. Then, with 12:29 to go, Jacobs netted the equalizer from point-blank range off a perfectly placed assist through the slot from top scorer Keith Lambert (7 goals, 6 assists).

Three and a half minutes later, Peter Owen Hayward — Syracuse's leading scorer last season (38 goals, 64 points) who helped it defend its North East Collegiate Hockey League title — capitalized on the Orange's final power play for the game-winner, a one-timed shot in the left circle set up by defenseman Ford Hatchett's pass from in the slot. Hayward added the last-second empty-netter with the Flames looking to tie the contest on a six-on-four advantage for the final minute.

Liberty outshot Syracuse 40-27 on the night, but went from firing 22 shots in the second period to just two in the third.

The Orange came into the game having converted better than 27 percent of their power-play opportunities and raised that rate above 30 percent by capitalizing on four of six chances Friday.

The two teams will meet again Saturday at LaHaye, where the puck will drop at 2 p.m.

"We'll be ready to go, and we're looking forward to it," Handy said. "We're going to learn from this. It's a good learning opportunity for us. We challenged them to be better (Saturday). I expect our guys to be rearing to go, and I expect our effort to be great."