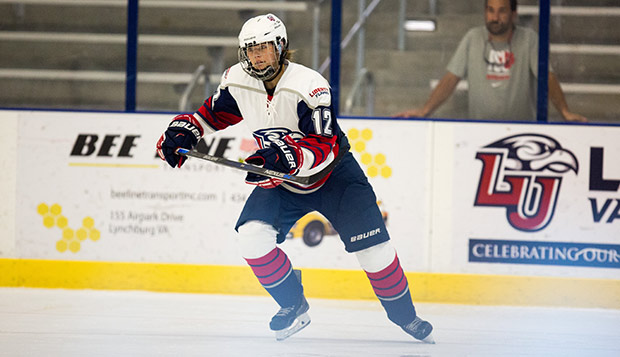 Liberty University's ACHA Division I women's hockey team made the most of its Fall Break road trip through Illinois and Missouri over the weekend. The top-ranked Lady Flames (3-2, 3-0 ACHA) completed a three-game sweep with their second 3-1 triumph over fourth-ranked Lindenwood-Belleville, late Saturday night at the FSI Shark Tank in St. Louis.

"We had an amazing weekend, a very successful weekend," Lady Flames Assistant Coach Leah Carlson said. "They're a ranked team and it was a huge weekend for us to pull off a sweep on our first road trip of the season. We are so proud of the girls."

Carlson was impressed with the hustle, hard work, and sense of purpose Liberty played with in its third game in as many nights.

"We had late games and going into the third game, the girls would have had every excuse to say that they were tired or lacked energy," she said. "But they didn't give any excuses. They came out flying today, ready to play. They got the job done and had a lot of fun. This was a huge step for us for the rest of the season."

Perhaps no player demonstrated that relentless effort better than junior forward Lauren McDonald, who started and ended the Lady Flames' scoring with goals early in the second period and late in the third to account for the margin of victory.

After breaking a scoreless tie off assists from senior defenseman C.J. Tipping and sophomore forward Vanessa DeMerchant, McDonald iced the win with a spectacular insurance goal with 1:36 remaining in regulation. Skating down the center of the ice, she received a short outlet pass from freshman forward Shannon Fehr and started an odd-man rush, finishing her second score even after colliding with a defenseman as she cut into the crease.

"Lauren had an unbelievable goal," Carlson said. "She fell down on her stomach and still managed to put the puck away top shelf."

Things didn't come easy for the Lady Flames in a scoreless first period.

"We fought the puck a little bit in the first period when bounces weren't going our way," Carlson said. "Hockey players sometimes have to fight a little bit harder (to get going.) We took a step back and settled down and played better in the second and third periods."

Liberty employed all four of its lines on attack and eventually wore down the Lynx (2-2).

"This team's really deep," Carlson said. "We were rolling new lines every chance we had. Our depth was huge and is going to be beneficial, something that we can rely on going through the season."

For the second night in a row, Liberty's defense limited the host Lynx to one goal — on a shot through traffic by freshman defenseman Lindsay Gillis taken inside the left circle, cutting the deficit to 2-1 with 4:33 left in the second period. ?Earlier, sophomore forward Mackenzie Carroll had lifted the Lady Flames to a 2-0 lead off an assist from senior forward Chelsey Greenwood.

There were no power play goals scored by either side in the contest and Lindenwood only had three power plays on the night.

"We are really working on playing the game of hockey and eliminating penalties," Carlson said.

Overall, the Lady Flames allowed only two goals in three games over the weekend after shutting out McKendree University on Thursday night.

"The defense did a great job this weekend," Carlson said. "It's always exciting to see when you have goalies ready to play. This weekend, we were successful because everyone came together and beared down."

"Kelly did an unbelievable job tonight," Carlson said. "She came up with big saves when we needed her to and did her job."

Carlson was happy to have senior defenseman C.J. Tipping back in the lineup after she had missed the previous few games.

"It was fun to have her back, and she was excited too," Carlson said. "She's a very big impact player on the defensive end.? We have a very strong defensive corps and we're going to keep playing strong defense. The girls are very coachable, wanting to learn and grow, and we have a great coaching staff, with Head Coach Chris Lowes and Assistant Coach Justin Forth. We are very excited about this weekend and the rest of the season."

The Lady Flames will return to the LaHaye Ice Center for two games against Penn State over Homecoming Weekend, starting at 6 p.m. Saturday and 11 a.m. Sunday.

"We got our job done this weekend and we're going to get back to work on Monday and try to do the same thing against Penn State," Carlson said.