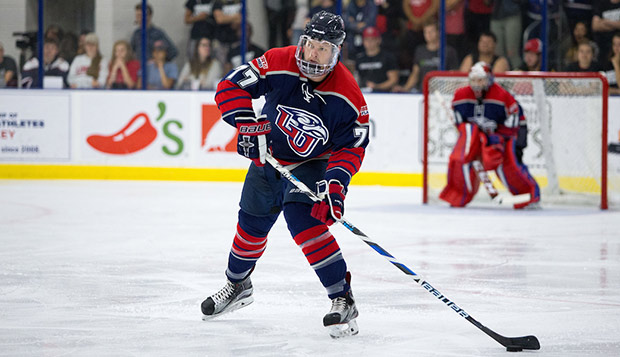 The Flames (5-1, 4-0 ESCHL) outshot the Ice Knights (0-4, 0-2) by a 39-31 count, scoring two goals on 22 shots in the first period, three goals on just eight shots in the second, and one goal on nine shots in the third. Junior goalie Halpenny stopped all 31 shots he faced for his first shutout of the season after junior transfer Cole Burack recorded his first as a Flame on Friday night.

"Josh played a solid game in goal and made some big saves for us," Liberty Head Coach Kirk Handy said. "He had good support from guys blocking shots in front of him and that makes a big difference. Anytime you get back-to-back shutouts, it shows all the guys in the lineups and defensive pairings have bought into what we're trying to do and are paying more attention to detail in our own end. Guys were working hard in the defensive zone and it paid off."

The Flames capitalized on two power-play opportunities in the first period, starting with sophomore forward Brock Thompson's icebreaker four minutes after the opening faceoff. Freshman forward Cole Gammer pushed Liberty's lead to 2-0 with a one-time finish off assists from sophomore defenseman Jacob Fricks and freshman forward Jordan Bochinski with 10:39 left in the stanza.

"It was the special teams that came up big for us again today," Handy said. "We scored two power-play goals and our PK was 100 percent tonight, killing all four of their chances. That's one of the keys we have each game, to win that battle, and we also performed well in the faceoff circle today."

Moments after Liberty extinguished two Ice Knights power plays early in the second period, senior forward Grant Garvin intercepted a Rutgers pass and skated the puck the length of the ice before finishing to lift the Flames to a 3-0 advantage.

"Garvin battles every night and has been a solid leader for us this year," Handy said. "That's a huge goal and then Hamilton scores 19 seconds later and that changed the complexion of the game. They were starting to put pressure on our goal and Halpenny made some big saves."

Hamilton's score — the Flames second goal on two shots in the period — padded the lead to 4-0 before sophomore defenseman Chaydan Lauber made an excellent play in the offensive zone and sent a crossing pass for Garvin who one-timed his second goal into the back of the net.

With five minutes remaining in the third period, Hamilton won a battle for the puck in the corner and sent it to Cox, who assisted Carlson's final goal.

"Sam made a nice shot," Handy said. "He was able to snipe it. The line of Cox, Carlson, and Hamilton was probably one of our better lines tonight. We're starting to get more contributions from that line and we got goals from Gammer and Thompson so it was nice to get offensive production throughout the lineup."

Liberty has a week off to prepare for Homecoming Weekend matchups against ESCHL newcomer Syracuse on Oct. 13-14.

"We opened their rink at Syracuse years ago and played them down here as well, but this might be our first time playing them as a Division I team," Handy said. "We're going to get back to work Monday and continue to improve and get better. We played well this weekend and we want to continue to earn the right to be successful."