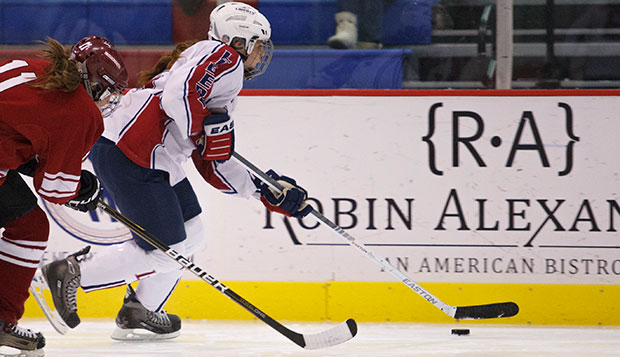 The Lady Flames Division I hockey team wrapped up a four-game road trip to the Midwest with a pair of victories over the University of Wisconsin, 7-1 on Monday and 8-0 on Tuesday. Liberty split two games with Minnesota at the same venue in Madison, Wis., Friday and Saturday.

On Monday the Lady Flames pummeled the Badgers with a scoring frenzy. Sarah Stevenson got things started with a goal off the Carly Peleshok assist. Autumn Kucharczyk then set up freshman Keeley Beisinger perfectly for the score. Liberty ended the first period with a 2-0 lead.

In the second, Beisinger came out charging, scoring her second goal off an assist from Katy Girnus. With six minutes left in the second period, Laura Del Monte scored unassisted on the changeup. Peleshok put in her own rebound to close Liberty's second period scoring. Courtney Fischer had the assist. The Lady Flames led 5-0 entering the third period.

Halfway through the final period Wisconsin got on the board after a poor turnover by the Lady Flames on their end of the ice. Besinger responded almost immediately with her third goal, pounding in a pass from freshman Catharine Burrell.

Lady Flames Head Coach Paul Bloomfield said it was nice to see several players get a lot of playing time in the game, especially the freshmen.

"It is good to see our freshmen settling into our coaching systems and to see them start to flourish."

Besinger posted the first hat trick of her collegiate career.

Liberty kept up the offensive intensity in Tuesday's rematch and improved upon its mistakes as the Lady Flames shut out the Badgers 8-0.

The Lady Flames stepped it up further in the second, beginning with a Peleshok goal. Stacey McCombe was assisted to a score by Madision Fischer five minutes later. Fischer put one in herself another two minutes later off an assist from Brittany Hymers. Less than a minute later, Courtney Fischer scored on a power play. The assist went to Peleshok and McCombe. Jickling closed out the second period onslaught with a power play goal assisted by Del Monte.

After scoring seven goals, five of which in the second period, the Lady Flames dialed it back, scoring only one goal in the final frame: Jickling scored for Liberty at 6:31, assisted by Grainger.

Liberty will host the University of Colorado three times Nov. 29-Dec. 1. The first of the matchups begins at 7:30 p.m. in the LaHaye Ice Center.