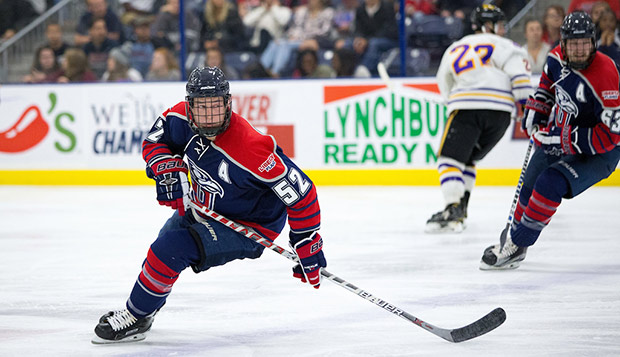 Unleashing a torrent of offensive firepower in Saturday night's rematch with West Chester, Liberty University's ACHA Division I men's hockey team racked up the most goals it has scored in one game in at least five seasons in a 14-2 rampage over the ESCHL rival Golden Rams.

"We're definitely on the right track and hopefully, we can keep this going for the rest of the year," said Flames sophomore defenseman Josh Bergen, who netted the first goal of his career. "We definitely played in their end more than they played in ours and the physicality made a big difference for keeping it down there. It's a really good feeling to know that we have that scoring ability and that we can just keep moving forward."

"We're definitely on the right track and hopefully, we can keep this going for the rest of the year," said Flames sophomore defenseman Josh Bergen, who netted the first goal of his career. "We definitely played in their end more than they played in ours and the physicality made a big difference for keeping it down there. It's a really good feeling to know that we have that scoring ability and that we can just keep moving forward."

Ryan stuck back the rebound of Thompson's wide-open shot from the high slot from near the left post to put the Flames in front, 1-0 at the 13:48 mark. Then, with the teams skating four-on-four, Ryan made a steal near mid-ice and sent a crossing pass to Garvin cutting inside the left circle. Liberty's scoring leader over the past two seasons deked the puck in front of Golden Rams goalie Breandan Colgan and lifted a backhanded shot near-post, top-shelf over Colgan's shoulder for a 2-0 advantage with 9:56 left in the first.

The Flames (3-1, 2-0 ESCHL) seized a 3-0 lead moments after another scoreless power play on a spectacular move by freshman forward Jordan Bochinski, who skated the puck along the left endline and in front of Colgan before tucking his first goal in a Flames' uniform inside the right post with 4:40 to go in the period.

West Chester (1-3, 1-3) trimmed the deficit to 3-1 by capitalizing in the opening seconds of its second power play. Leading scorer Jake Horacek, who netted the Golden Rams' only goal in the teams' Midnight Mayhem matchup the night before, sneaked a shot from the top of the right circle past Liberty goalie Josh Halpenny.

Liberty didn't waste any time in extending its edge to 4-1 at the 19:41 mark of the second period when freshman forward Ryan Cox skated behind West Chester's cage and set up head captain Josh Hamilton for his first goal of the season on a shot from deep in the right circle.

Less than a minute and a half later, Thompson, who netted a hat trick in the series opener, one-timed junior defenseman Zane Schartz's perfectly placed cross-ice assist from the left corner past Colgan to give the Flames a 5-1 cushion with 18:14 still to play in the second period.

Ryan kept the offensive fireworks show going with an unassisted score four and a half minutes later, receiving a fast-break feed and skating wide right before rattling his shot inside the left post, off the side and back netting to make it 6-1 with 13:43 left in the stanza.

The Flames' attack was just warming up as it scored four more goals over the next seven minutes, sandwiching two before and two after a Hornacek breakaway bottle-popper off a faceoff won by West Chester, to build a commanding 10-2 advantage on Schartz's second score at the 6:43 mark.

Bergen started the scoring surge by ripping a shot from in the right circle off an assist from Cox through the five hole for his first goal as a Flame, despite playing forward as a freshman.

Schartz then showcased his offensive skillset by finishing a cross-ice feed from Garvin with a sharp-angled shot from the right circle, padding the lead to 8-1. After Hornacek's second score, sophomore forward Victor Blomberg managed to release a pass while falling down as he skated toward the left endline to junior forward Zechariah Roberts, who put the puck away top shelf while falling down himself on a check from behind by West Chester's Derik Semetti.

The Flames added four unanswered scores in the third period past Golden Rams backup goalie Colby Fiel, with Schartz getting things started by setting up Cox for a fast-break top-shelf finish while falling down in the right circle to make it 11-2 with 14:15 left in regulation. Gammer continued the onslaught with a crossing pass to Bochinski for an open-net top-shelf score before Schartz received a short outlet from Roberts and spotted Blomberg open in the right crease for another easy finish. Roberts put the finishing touches on the lopsided triumph by lifting a point-blank shot past Fiel to punctuate an odd-man rush by the Flames.

Liberty embarks on its first road trip next Friday and Saturday at ESCHL foe Rutgers (N.J.), with game times set for 8:30 and 3:30 p.m., respectively.