Liberty lights it up in first, rolls to win over Stony Brook 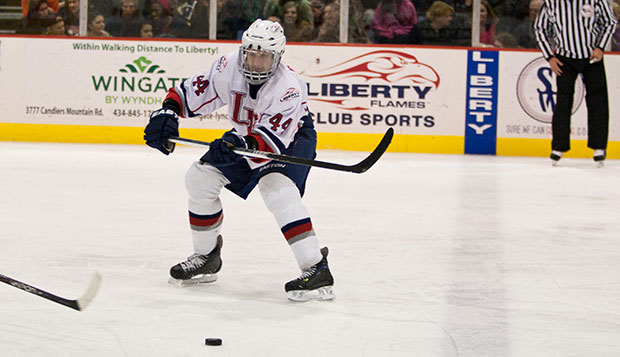 The Flames Division I men's hockey team scored four goals in the opening period at Stony Brook Sunday en route to a 6-3 victory. Liberty split the two-game series with the Seawolves who defeated the Flames 6-4 Saturday night.

Stony Brook got on the board first, 1:30 into the game, but Liberty, determined not to let another one drop at The Rinx in Hauppauge, N.Y., responded not once, but four times. One minute later Cam Bakker scored for the Flames and Stony Brook saw its last lead of the weekend disappear.

Ryley Egan hammered home a rebound on a power play to give Liberty the advantage at 13:14 in the first. Less than six minutes later, Egan found the back of the net again off the assist from Lindsay LeBlanc, again on a power play. Bakker wrapped around the net to score with a-minute-and-a-half remaining in the first, and the Flames carried the 4-1 lead into the first intermission.

Though the Flames were shorthanded early in the second, LeBlanc managed to put one in for a 5-1 lead. Stony Brook finally broke the five-goal Flames scoring run at 12:41 in the second period, and again little more than a minute later.

Kyle Garcia scored for Liberty on a two-on-one breakaway midway through the second to secure a 6-3 Flames lead.

Liberty held off the Seawolves attack for the remaining period-and-a-half, securing its tenth win of the season.

The Flames travel next to Davenport, Mich., for a head-to-head with the Panthers Nov. 29 beginning at 8:30 p.m.