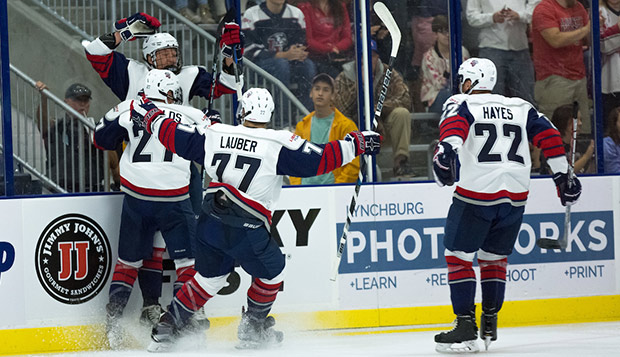 The Flames celebrate the first goal of the 2017-18 season, and first of freshman forward Sam Carlson's career, last Friday at the LaHaye Ice Center. (Photo by Nathan Spencer)

The phenomenon known as "Midnight Mayhem" makes its 2017-18 Club Sports debut this Friday night at the LaHaye Ice Center, where Liberty University's ACHA Division I men's hockey team hosts West Chester. The puck will drop on its Eastern States Collegiate Hockey League (ESCHL) regular season soon after the stroke of midnight, with the Flames' faithful on hand to help them rock the rink.

"That ramps it up even more with it being our ESCHL opener," Liberty Head Coach Kirk Handy said. "It will be a great atmosphere."

The Flames begin their quest for an ESCHL regular-season title and autobid to the ACHA Division I National Championships in Columbus, Ohio, after capturing the tournament title in their first season in the conference.

Liberty remained at No. 15 in this week's ACHA DI rankings after a night-and-day performance in its season-opening home series against Alabama, rebounding from a 3-1 setback last Friday night at with a 6-1 rout of the Crimson Tide in Saturday afternoon's rematch.

"We're looking to build off Saturday's effort," Handy said. "We've been working hard in practice this week and adjusted some of the lines. It's early in the season and we're still trying to find the best combinations."

But he scrambled the second and third lines, teaming freshmen forwards Jordan Bochinski and Cole Gammer with sophomore head captain Josh Hamilton on the second line while putting junior Zechariah Roberts on the third line with freshman Ryan Cox and senior Colt Steele.

Liberty's defense was extremely efficient on its penalty kill over their opening weekend, allowing just one man-down goal in the closing minutes of Saturday's contest. Handy was also satisfied with Liberty's power play production, which netted two goals in Saturday's second game after being shut out in the opener.

Nelson had a breakout offensive series against West Chester as a freshman last season, netting a hat trick on shots from the point in his second game in a Flames jersey.

Between the pipes, junior transfer Cole Burack nearly netted a shutout in his Flames' debut, making 26 saves on Saturday before allowing the last shot he faced to trickle through traffic on an Alabama power play for a 96.3 save percentage.

West Chester scouting report: After finishing in last place in the ESCHL last season, the Golden Rams won their season opener against ESCHL rival and No. 19 ranked Delaware last Friday at home, 3-1, before dropping Saturday's rematch, 4-2. The team returns two of its top three scorers from last season, including Jake Horacek (15 goals, 20 assists in 2016-17), who contributed two assists and racked up 16 penalty minutes in two games against the Blue Hens.

In goal, West Chester's Brendan Colgan started both games against Delaware and made 66 saves for a 93.0 save percentage and 2.50 goals-against average.

Series record: Liberty won all five of its meetings with West Chester last season, their first as ESCHL rivals, including a 5-3 victory in the first round of the ESCHL tournament. Those were the teams' first five matchups in more than a decade and first at the ACHA Division I level.

Coaches: Handy is in his 18th season as the Flames' head coach and has compiled an overall record of 376-167-25. Eric Wolf replaced Bill Swahl, who posted a 25-67-1 mark the past three seasons as the Golden Rams' head coach, and is now 1-1 at the helm.