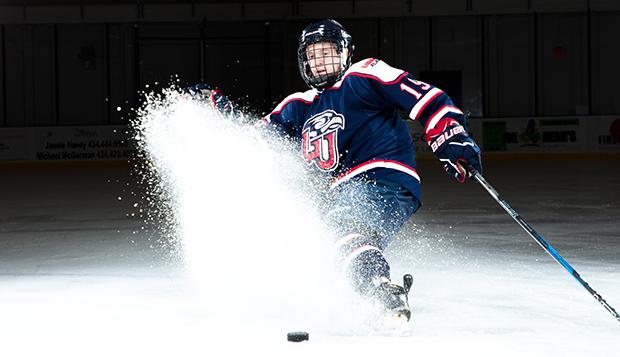 Liberty returns its top 10 scorers from last season, including sophomore Quinn Ryan (second), who had 18 goals and 27 assists last season.

When the puck drops on Liberty University's 2017-18 ACHA Division I men's hockey season, Friday at 7 p.m. against Alabama at the LaHaye Ice Center, the Flames will look to carry in the momentum from last year — when they won their final 10 games to secure a spot in the ACHA DI National Championships —and generate playoff-level intensity from the first faceoff.

"Something we have established (in the preseason) is we've got to work for it now," Liberty junior forward Zak Hayes said. "We can't come in in February or March and say, ‘We want to win.' We're putting in the hard work and long days now so when it comes to playoff time, we're ready to go."

Head Coach Kirk Handy wants the Flames to set the tone for the season from the start, rocking the rink with support from some of the most faithful fans in the ACHA.

"There will be a ton of excitement and we're looking forward to it," he said. "It'll be a great atmosphere. We always have a great environment to play here and we're very blessed. Our guys are going to go out and work hard and show that the hockey team's part of the fabric of the university. We enjoy being part of the student body and a big part of the student experience here at Liberty."

Handy has been pleased with the commitment shown by his returning players and how they have rubbed off on the Flames' seven newcomers.

"We feel really good about our team this year," he said. "We've worked hard in the offseason. We've worked hard in the preseason to get us to this point and this weekend will be a great opportunity to put all of our hard work into practice. The sky's the limit for this group, that's for sure. We have a deep team and we believe in every one of the guys and we're just excited to get going."

Senior goalie Josh Halpenny, who finished 5-1 and posted a 92.4 save percentage with two shutouts and a 2.29 goals-against average last season, said the Crimson Tide will provide a good non-conference test for the Flames, who did not have any preseason warm-ups.

"Alabama has always been good competition in the past so it will be a great way to get the season started," he said.

"As a team, we are 100 percent ready to get rolling," Liberty junior defenseman Zane Schartz added. "Everybody's chomping at the bit to show what we have this year, to put all the pieces together."

Liberty scouting report: The Flames bumped up two spots from their final 2016-17 ACHA DI ranking to debut at No. 15 in the Preseason Poll. They feature five lines of forwards, including six newcomers. Liberty brought back its top 10 points leaders from last season, paced by 6-foot-4 senior Grant Garvin (21 goals 27 assists in 2016-17), who has led the team in scoring for the past two seasons. He will be complemented by sophomore forward Quinn Ryan (18G, 27A), the Flames' second-leading scorer last year, and Schartz (18G, 24A), who ranked third as an offensive-minded defenseman.

Alabama enters its third season competing as an independent program at the ACHA Division I level. The Crimson Tide went 19-14-2 last year, its only season under John Bierchen, who was named an assistant coach with the ECHL's Indy Fuel over the summer.

Bierchen was replaced by Kyle Richards, a former head coach with ACHA Division I West Virginia — where he led the Mountaineers to a 21-16-1 record. Richards coached the Crimson Tide's forwards and power play unit as an assistant last season.

Series record: The teams split their first-ever series last season and are now 2-2 in head-to-head play.

Coaches: Handy is in his 18th season as the Flames' head coach and has compiled an overall record of 375-166-25. Richards is making his debut at the helm of the Crimson Tide.