Flames back with renewed focus, size, speed, strength on ice 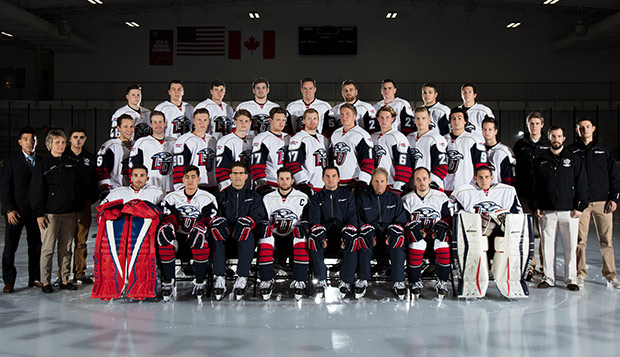 Though they showed signs of fatigue by the end of Monday's practice in the LaHaye Ice Center, Head Coach Kirk Handy is confident the Flames will emerge stronger in time for Friday's first puck drop of the 2017-18 season, set for 7 p.m. at home against Alabama.

"Our team took a huge step forward this past weekend," he said. "It was a tough grind (but) I was so impressed with the attitude and the work ethic our guys showed. They were mentally and physically exhausted but it was nice to see them battle together and come out on top."

Liberty returns the majority of a team that dethroned four-time defending champion Stony Brook to capture the Eastern States Collegiate Hockey League (ESCHL) tournament title in its first season in the league and took a 10-game winning streak into the ACHA Division I National Championships before being eliminated in the first round by Colorado State. The Flames added five new recruits and two DII call-ups in the offseason and have the depth of talent needed to make a stronger postseason surge.

"Coming into this season, we're hitting full stride," Schartz said. "Practices are really crisp and we're ready to start the season off in front of our fans. We've set a goal to win a national championship. That's kind of an audacious goal, but I believe we can achieve it."

"Our strength coach (Chris Kerr) ran some workouts with us and we skated almost every day for the last two or three weeks of the summer," he said. "Strength-wise, guys are coming in stronger. We obviously added some size for this season and speed as well, and adding strength on top of that is going to help us, especially deep down in the corners. We have five lines ready to roll, that can produce and get the job done — putting points on the board or grinding down low and helping out defensively."

The seventh newcomer is junior goalie Cole Burack, a transfer from NCAA Division III SUNY Brockport, who will platoon with senior Josh Halpenny, who is fully recovered from a hip injury that sidelined him for most of his sophomore season and the first semester of his junior year. Both have the same diminutive stature as Flames Assistant Coach and former NHL goalie Dan Berthiaume.

"Our goalies are going to be fantastic," Liberty sophomore defenseman Jacob Fricks said. "They are small, but when they are in the net, they play huge for us."

"We've definitely got size everywhere throughout our lineup," said Fricks, who is 6-feet, 3-inches tall and packed on 15 pounds over the summer to nearly match Crane (6-3, 205) and sophomore defenseman Chaydan Lauber (6-2, 225). "We're going to have a hard-working team this season and if we can put our skill and hard work together, we should be untouchable."

In their second season in the ESCHL, the Flames have two new teams to contend with — Syracuse and New York University, which defeated Liberty in last season's ACHA Division II championship game.

"As the conference grows, the play is going to get stronger and stronger and teams are going to want it more," Hayes said. "Winning the ESCHL (tournament) last year, there is a target on our backs now."

Liberty is eager to make a positive first impression in Friday night's season-opener and Saturday's 2 p.m. rematch with the Crimson Tide before beginning ESCHL play next Friday at home against West Chester in the first of two "Midnight Mayhem" contests this season.

"We've got a really good team, all the way from defense, forwards, goal scoring, penalty kill, and power play," Halpenny said. "Everyone has a great attitude and we're getting along great both on and off the ice, so we're looking forward to seeing what we can do this year."